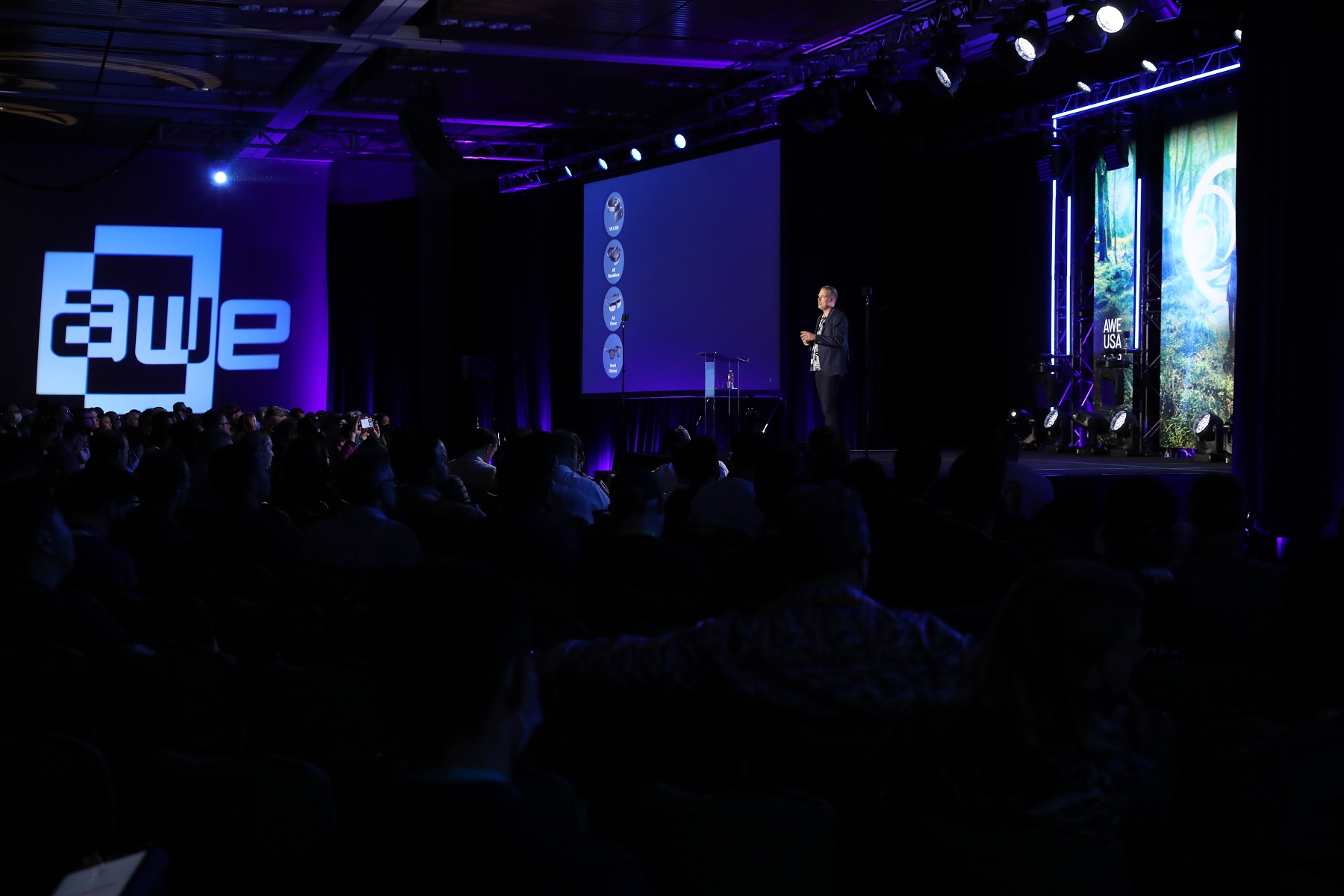 The day has finally arrived, AWE USA 2022 is finally upon us, and what an incredible opening day it has been at the XR industry’s favorite reunion here in Santa Clara, CA today. The excitement of once again being present face-to-face could be felt by everyone, and the energy has been electric since the doors opened to the Santa Clara Convention Center this morning.


Kicking things off on the Main Stage with his keynote and opening speech was AWE CEO and Co-founder, Ori Inbar, who focused on the topic of making dreams come true. In fact, our industry is essentially in the dream fulfillment business, according to Ori.


After showing us both his incredible Augmented air guitar skills, along with his bucket list of dreams, which included walking on the moon, flying, exploring the deep ocean, visiting the wonders of the world, and climbing Everest (all of which are currently possible in VR!), Ori's final dream on the list was to “get superpowers” – again, something that XR is able to help with. 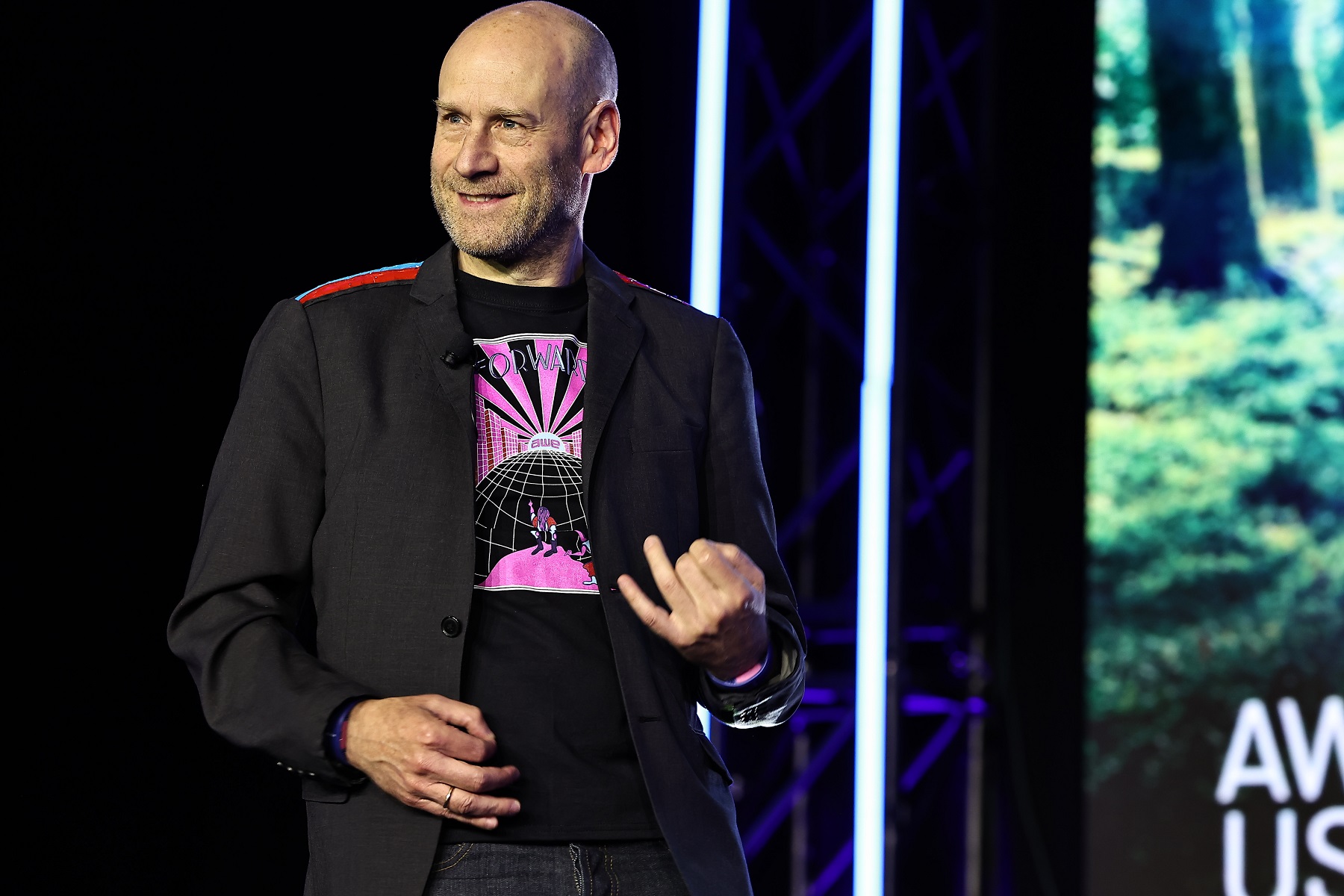 Some of the superpowers that XR technology has enabled to date are: X-ray vision, teleportation, matter manipulation, skill mastery, telekinesis (i.e. moving things without touching them), and time travel (to name but a few). So, we can consider this another dream fulfilled thanks to the magic of XR.

Nearing the end of his keynote, Ori also announced AWE's own 'XR Prize Challenge' – a new year-long innovation challenge that is designed to encourage companies to come up with XR innovations that can help to fight climate change. The XR Prize Challenge will allow any team in the world to compete for a $100,000 cash prize, with no strings attached. No strictures or limitations are placed upon the winning entry, and all Intellectual Property (IP) will remain the sole ownership of the winning team. To be notified when the competition begins, fill out this form. Ultimately, with climate change being the greatest threat facing mankind in the 21st century, if we don't work to tackle the issue now, chances are, the dreams of future generations will be much harder to accomplish.


It is this theme of the XR industry enabling dreams for users that will be very much front and center at this year’s event, purely due to the fact that XR is now more than ever making things previously thought to be impossibile, possible. However, there are also the lifelong dreams of the XR industry and those working within it to consider too. Whether it is a start-up dreaming of being acquired, an investor dreaming of landing that next unicorn investment, enterprise users dreaming of making their workplace more productive through XR, or a wider community dream of making the world a better place, XR has the power to deliver on all of these. And with that, Ori signaled to the audience that now is the time to use XR to turn all of these dreams into a (extended) reality.


After Ori’s initial opening keynote, which INCREDIBLY, did not use the word “Metaverse” a single time (it’s true!), Unity CEO, John Riccitiello, took to the Main Stage for his own keynote speech and to begin AWE USA 2022’s packed agenda that this year includes more than 400 speakers. In his talk, titled ‘Getting Beyond the Fiction and Seeing the Reality in the Metaverse,’ Riccitiello covered the XR industry’s favorite buzzword, where he broke down what the ‘Metaverse’ is, what it isn’t, and how brands can get beyond the buzzword that the term has become. 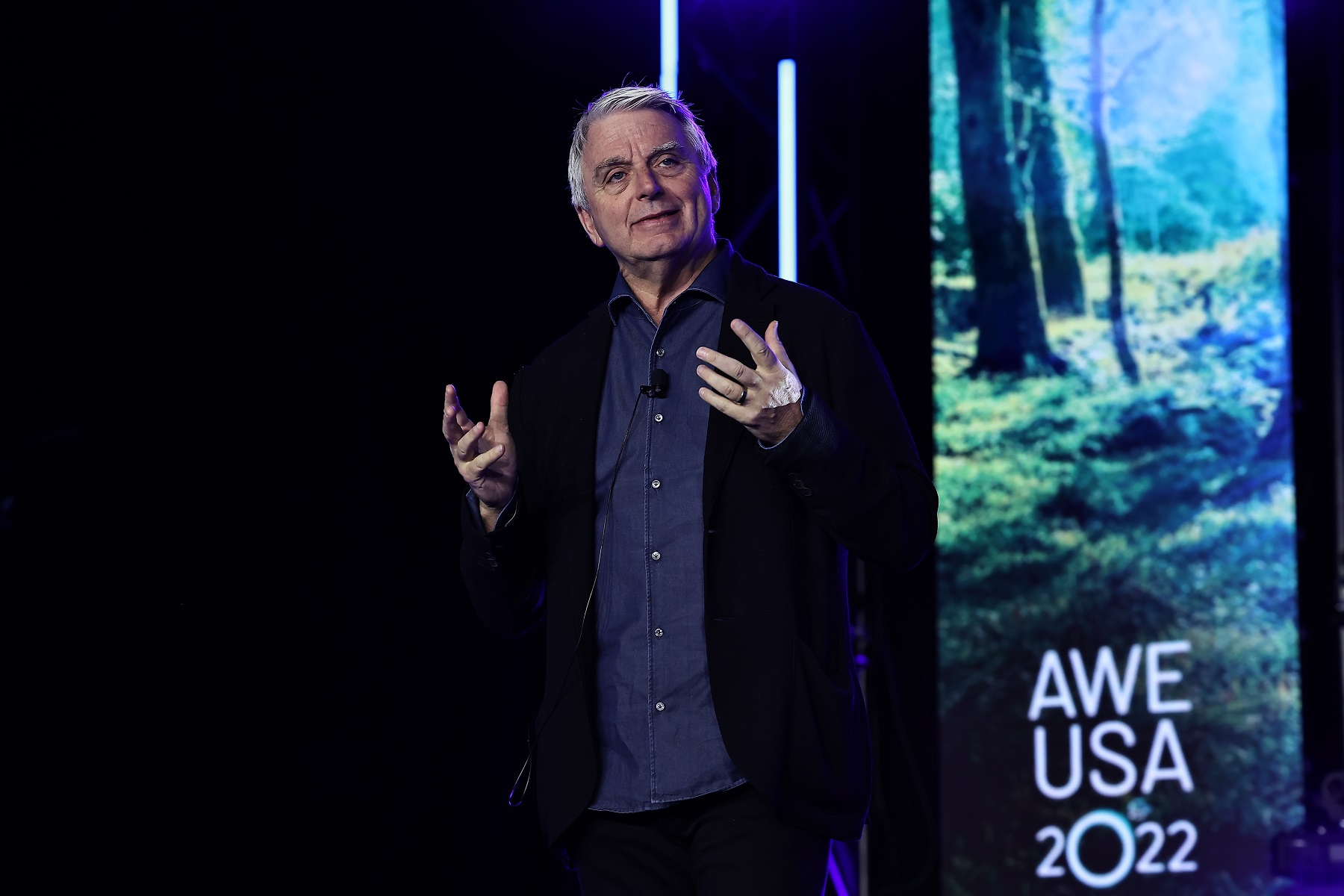 Providing his own definition, he defined the metaverse as: “The next generation of the internet that is always real-time and mostly 3D, mostly interactive, mostly social and mostly persistent.”


That’s a definition we can more than mostly get behind.


Did you also know that 60% of all Augmented and Virtual Reality experiences are built on the Unity Platform? If not, you do now. It just goes to show how companies like Unity are really helping to lead the way in the XR industry by enabling the creation of content that will eventually populate the metaverse.


Continuing with companies that are paving the way for enabling the future of the metaverse, as well as the future of XR technology in general, next up on the Main Stage was Qualcomm’s VP & GM of XR, Hugo Swart, who discussed a variety of XR devices and exciting developer tools, such as Qualcomm’s Snapdragon Spaces, which are going to help to drive immersive spatial computing experiences.


“We’re very excited to open this platform to work with all of you. So I invite you to work with Spaces - to develop and create with Spaces, so that together we can write the next chapter of the metaverse journey,” said Swart. 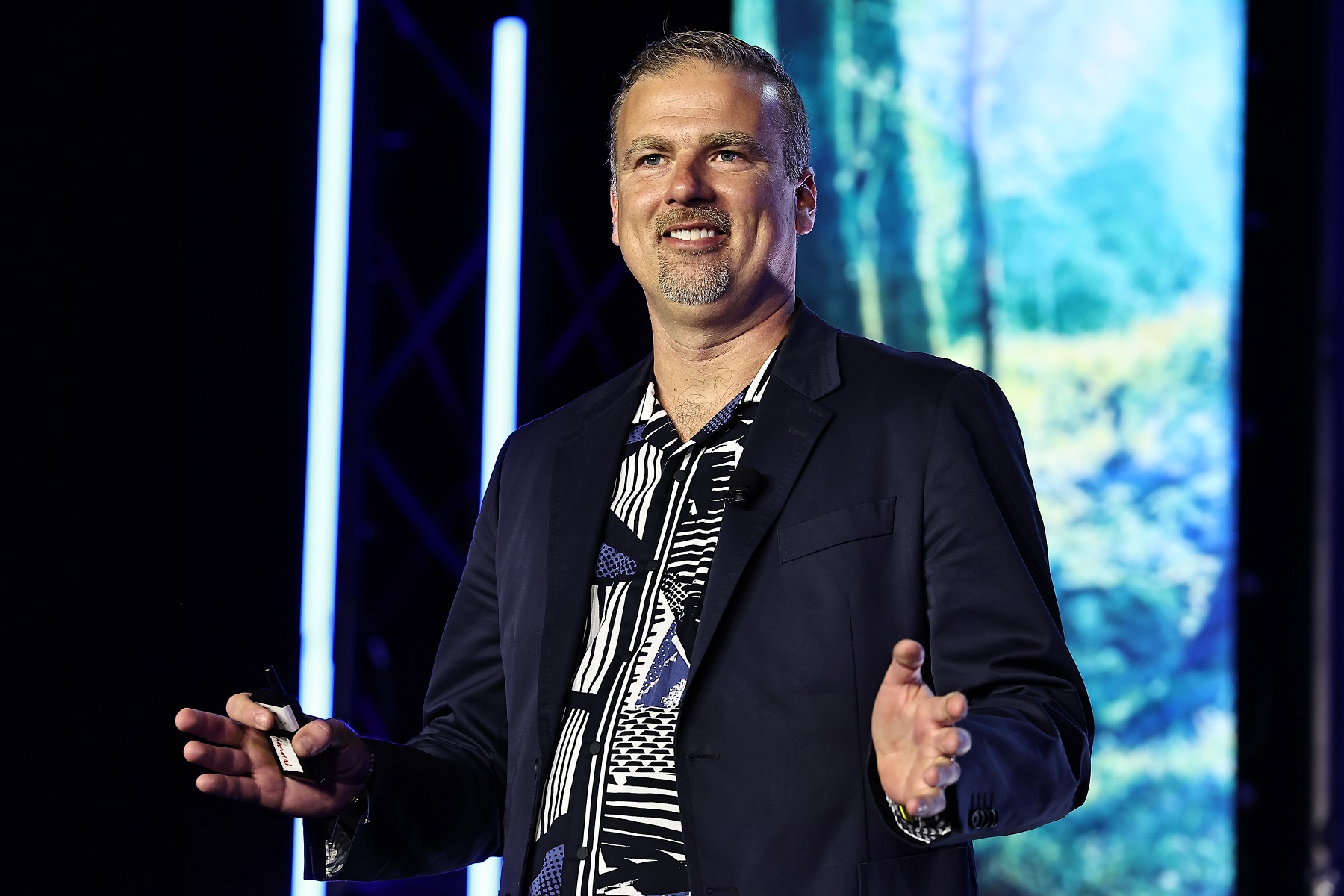 In fact, there was plenty of praise being given to the Snapdragon Spaces platform throughout the day by developers themselves. At the Developer track later in the day, a panel on ‘Building AR Apps With Snapdragon Spaces,’ chaired by Qualcomm’s Dan Flanegan, went into some detail on how developers can save themselves the hassle of having to develop separately for multiple devices thanks to the platform. This is in part due to the fact that Snapdragon Spaces uses OpenXR standard, and also Unity’s XR Foundation framework.


It wasn’t just in-person attendees who were able to witness the Main Stage talks today though. Those who couldn’t make it in-person to this year’s event are still able to watch Main Stage talks online for free via awe.live, and virtual attendees seemed just as engaged in the Main Stage activity as everyone physically present, with the chat full of comments and questions from XR community members from around the world.


As well as all the Main Stage talks throughout the day, around the venue several amazing track sessions took place from across many of AWE’s 15 agenda tracks. Highlights included:

Other highlights of the day included Snap’s talk on how its camera software has evolved into a powerful and robust augmented reality platform. In addition to this, the company also hosted the Snap Lounge, a networking event where visitors were able to try out Snap’s Spectacles AR glasses, making AWE the first event where the public has been given access to try on and demo Spectacles at scale.

Wrapping up the end of an incredible first day is now the Welcome Party, sponsored by Zappar, which is being hosted poolside at the ​​Hyatt Regency Santa Clara Terra Courtyard. Attendees are going to be able to mingle over drinks and snacks, discuss their favorite topics and learnings from the first day, and generally share some fascinating XR chat. For many people who were unable to make last year’s event in November, this socializing after a busy day of talks and presentations will also mark the first time since the pandemic began that they are able to reconnect “in the real” with fellow XR professionals and friends from across the industry.


So far throughout the day already though, it has been truly great to see the industry come together in person once again, as well as faces unobscured by masks this time around (masks are not required at this year’s event, although recommended - still, for many it is now a matter of personal choice and preference).


Of the 80 or so talks that took place today across the Main Stage and other track stages, more than 25% had the word “Metaverse” in the title. That percentage doesn’t even come close to the number of talks in which the word was mentioned, which is probably closer to 100% (obviously, excluding Ori’s). We would love to know how many times it has been said in total on this first day alone (maybe there should be a prize for the closest guess).


If day one is anything to go by though, it seems that the XR industry is now comfortable with the Metaverse term, to the point where it may have now moved beyond buzzword status. That’s not to go as far as to say that the industry has embraced the word with open arms (some people have very mixed feelings about it still), but overall it seems that those of us on the cutting edge of this technology have accepted the Metaverse as a given, both in the terminology, as well as in the fact that this is where the future is headed. If the success of AWE USA 2022’s opening day is anything to go by, then the future of the Metaverse is looking very promising.


Stay tuned for tomorrow, where we’ll be covering the opening of the Expo Floor, as well as a host of launches and announcements from across the XR industry that are unveiled, and let’s not forget the XR industry’s most prestigious awards ceremony, with the results of the 13th annual Auggie Awards being announced.