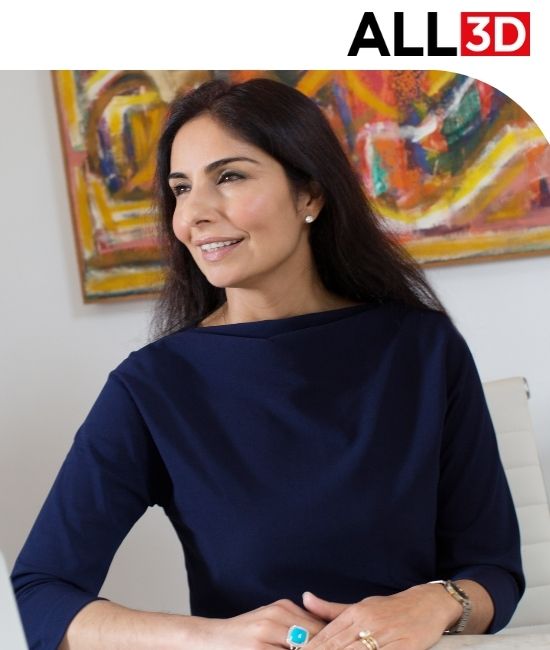 Amra Tareen is a seasoned entrepreneur who has started groundbreaking digital media companies and has been a pioneer in fields such as 3D, AR and VR, citizens media, Facebook video and iOS and Android apps.

A former Head of Bed Bath and Beyond’s Innovation Group. She lead initiatives including Augmented Reality (AR) iOS app for Bed Bath and Beyond where home products including furniture could be viewed in customers rooms in real dimensions. She also developed and launched a 3D customization program for Bed Bath & One Kings Lane, where customers created custom furniture. The genesis of ALL3D comes from Amra’s work at Bed Bath and Beyond and as CPO of Decorist (acquired by Bed Bath in 2017). At Bed Bath she and her team worked with partners like Google, Apple, HTC and others, along with wholesale vendors that sold their products via retail channels and direct to consumer via platforms like Shopify and marketplaces like Amazon. All of these brands are looking for low-cost alternatives for creating 3D, AR and still images without expensive photo shoots.

Previously, she was the Chief Product Officer an online interior design and ecommerce company Decorist (sold to Bed Bath and Beyond March 2017) where she managed product, engineering and Partner solutions (including Lowes and One Kings Lane).

Amra was also the founder and CEO of Allvoices.com, a global people’s media company that allowed anyone to report news or their story from anywhere in the world. Launched in 2008, Allvoices was the fastest-growing citizen media news site, with more than 10 million unique users per month and 460,000 citizen reporters from over 180 countries. Amra started Allvoices because she felt that mainstream media was too narrow and biased and did not provide access to multiple points of view. She believed there was a need for a social media platform where individuals could report on-the-ground news, share opinions and understand each other’s perspectives through real, unedited conversation. Allvoices used breakthroughs in machine learning, natural language processing and crowd sourcing for contextual analysis and matching to perform editorial functions. It also was an early user of search engine optimization and social media to distribute news. Allvoices, which was backed by VantagePoint Venture Partners was acquired by PulsePoint Media/Datran Media in 2011.

Prior to Allvoices, Amra was a partner at the venture capital firm Sevin Rosen Funds, focusing on investment opportunities in software, communications/networking infrastructure and next- generation telecommunications carriers. Before joining Sevin Rosen, Amra was a product marketing director at Ascend Communications and Lucent Technologies, where she was instrumental in growing the DSL business. She was also responsible for product positioning, competitive analysis and outbound marketing for the remote access business.

Amra has an MBA from Harvard University and a Bachelor of Electrical Engineering and Computer Science from University of New South Wales, Australia. Amra was born in Pakistan and lived in Pakistan and Australia before moving to the United States to attend Harvard. She recently was the president of the Silicon Valley chapter of the Organization of Pakistani Entrepreneurs of North America (OPEN). Amra holds four patents for the work on Allvoices. Amra lives in San Francisco with her husband and two sons.