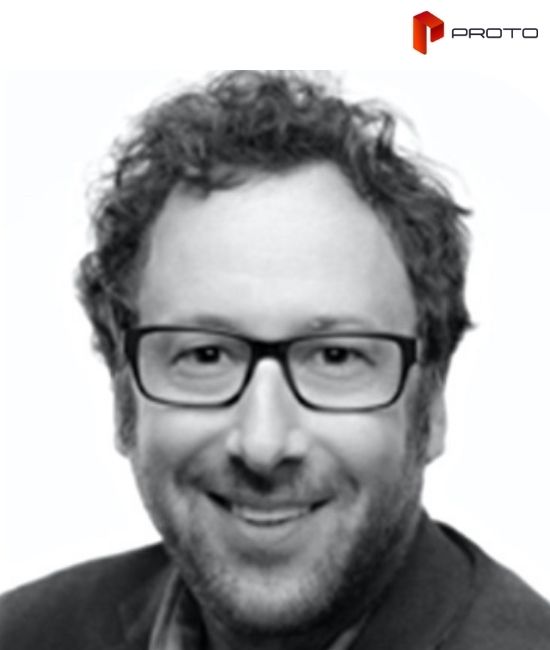 David is an award-winning writer and producer who founded PROTO after 20 years in the entertainment industry, having spent time in sports radio, television, podcasting and live events. His work was crucial in advancing hologram technology including benchmark moments that advanced the industry such as Jimmy Kimmel’s live appearances via hologram at the CMA Awards, the digital resurrection of Latin Music legends Juan Gabriel and Jenni Rivera, Julian Assange’s digital breakout of the Ecuadorian Embassy, the first hologram fashion show with Christian Dior, and the Ronald Reagan hologram at his Presidential Library. He has also completed projects with Jack Black, Sony Pictures, Universal Studios, NBC’s The Voice, Amercia’s Got Talent, the National Comedy Center and others.

Before David became a hologram entrepreneur, David was a podcaster with over 250 celebrity long form interviews to his credit, founded Podville Media, the world’s first all podcast advertising agency in 2010 which had partnerships with top podcast personalities including Kevin Smith, Adam Carolla, Jim Jefferies, and Marc Maron. Previously, he thrived for over a decade in the sports (Yankees, Dodgers, Lakers, etc) news (WCBS880AM, WFAN660AM, KNX1070, KFWB980, etc) and talk divisions of CBS and Sirius XM Radio.

David’s vision for PROTO is to facilitate communication of all kinds that adds the emotional element that previous virtual methods lack. He wants to see a PROTO in every home streaming world class interactive hologram content and connecting people across every kind of divide.

Holoportation: Bringing People Together Across Every Kind of Divide