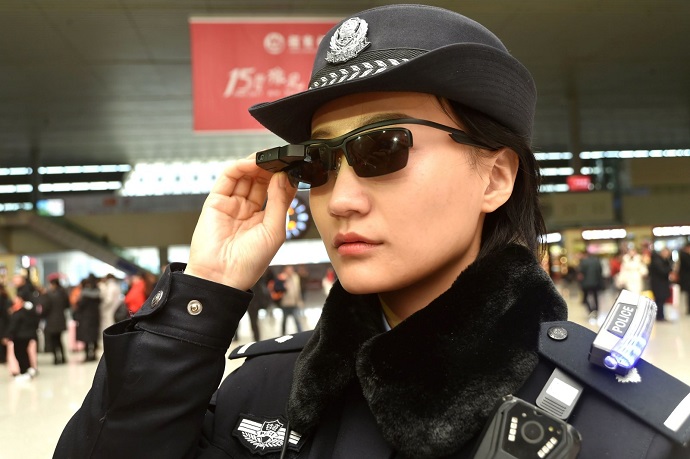 What can XR offer in the pursuit of justice? How might law enforcement, legal professionals, as well as defendants, plaintiffs, judges and juries, use AR+VR? Will there be more justice (higher conviction rates) in the age of XR or will the use of immersive visualization technologies in the courtroom prove prejudicial?

History of technology in law & order

Surprisingly, virtual reality isn’t new to the law. In 1992, jurors in a California courtroom used headsets to watch a VR-like, POV reconstruction of an accident in which a woman had crashed her Honda motorcycle. Dennis Seley, defense attorney for Honda Motor Co., aimed to show that the path the motorcyclist had chosen to take was a dangerous one. His presentation successfully persuaded the jury that his client was not responsible. Ten years later, VR was used in a simulated case at the Center for Legal and Court Technology. The presentation was the first full deployment of VR in a court room, though it was just for research purposes.

In 2018, the potential for immersive technologies in the legal system has received renewed attention. From examining a crime scene to testifying in court, AR and VR are beginning to prove their case:

The first officer to the scene of a crime isn’t always the most qualified to investigate it, so in 2016 Dutch police trialed an AR solution that streamed video from an officer’s body camera or smart glasses to forensic scientists, chemical analysts and other experts who could provide remote guidance during an investigation. The experts explored the crime scene from the officer’s perspective, pointing out evidence to bag and examine using annotations in his or her smart glasses or smartphone display. In late 2017, the Bedfordshire police tried out the Microsoft HoloLens Mixed Reality headset with software by Black Marble to record crime scenes for senior detectives back at HQ. Using hand gestures, on-site officers mapped entire crime scenes without touching anything; that, along with the technology limiting the number of people required on scene, greatly reduced the chance of evidence contamination or tampering.

These early forays into using AR to enhance crime scene investigating could also impact crime scene training and courtroom presentations. Photos and video captured via smart glasses at the crime scene serve to preserve the scene for later use in the investigation and trial; but that footage can also help create immersive training simulations. As shown in the 1992 lawsuit against Honda, VR crime scene simulation can be especially useful in science-based litigation like product liability and medical malpractice suits. Along with disproving claims, detectives and lawyers can use virtual crime scenes to test theories and search the crime scene again, possibly uncovering new evidence.

For several months now, Chinese police in Zhengzhou have been testing smart glasses with facial recognition technology to identify potential suspects and criminals traveling by plane or train. The solution can match faces in a crowd, as seen through an officer’s smart glasses, to a known criminal database. When a match is found, the suspect’s name and last known address “pop up” in the display. It’s easy to imagine the kind of useful in-FOV data and intelligence AR glasses could show officers on the job, especially when endowed with robust Wi-Fi, advanced sensors, and voice and image recognition tech—alerts about known criminals in the area, GPS directions, 3D maps of buildings, emergency procedure information, real-time language translations, infrared views, etc. Whether on patrol or participating in a SWAT operation, AR can improve the user’s situational awareness and response without distracting from the real-world action.

It’s difficult to talk about law and order in the U.S. today without acknowledging current events and the justice system’s many flaws. In the case of police brutality and fatal officer-involved shootings, we’re nearing an epidemic. While police body cameras may provide some oversight along with footage of what went down in a use of force situation; virtual reality has the potential to change minds and behaviors to prevent abuses of power in the first place. Last year, officers in Monmouth County, NJ started training in a new facility equipped with a VR simulator. The part-virtual, part-physical program put trainees in potentially dangerous criminal situations to help them learn how to react quickly and effectively without force. The hope is that the VR experience will lead to more positive outcomes and build trust between police and the communities they serve in real life.

In 2015, the German Public Prosecution Service engaged Ralf Breker, a forensic engineer, to create a VR version of the Auschwitz concentration camp. At the time, the German state was trying to convict former SS guard Reinhold Hanning. Hanning, who worked at Auschwitz, claimed he was unaware of what was going on there. Using a laser to capture Auschwitz’s physical geometry, Breker was able to virtually reconstruct the camp to its wartime state and show the judges – wearing HTC Vive headsets – that from his post Hanning could in fact see the rail yard where prisoners were sentenced to either slave labor or death. If this court tactic seems familiar, that’s because the use of VR to disprove an argument or defense goes back to that 1992 California courtroom. More recently in a Beijing courtroom, the sole witness to a crime used VR to walk through the crime again, sharing the view in his VR headset with the court via a projector screen.

Though VR legal exhibits are created from data gathered in the real world, standard use of the technology in court proceedings is controversial. In many ways, VR is a lawyer’s dream—an extremely powerful way to present evidence (especially scientific) and recreate events for the jurors, making them virtual eye witnesses to the incident or crime (as opposed to paying to physically transport jurors out of the courtroom). But is this juror education or juror persuasion by VR? Virtual reality provides a sense of presence like no other medium, potentially increasing jurors’ emotional connection to the crime. Would this affect the jurors’ ability to understand the facts, or their psychological state in the case of violent accidents or crimes? The appeal is not only to prosecutors; defense attorneys could use VR to come up with better defenses, but are VR crime scenes accurate representations of what really happened? And would conflicting virtual recreations of a crime presented by the prosecution and defense overwhelm jurors?

Witnesses could also benefit from VR as a memory aid in cases involving events long passed. Again, the risk is that rather than clarify what the witness experienced, virtual reality may convince him of a version of the event. In the short term, AR in the courtroom may be more realistic as a way to save victim anguish—victims of sexual abuse, for instance, would not have to face their attackers if they could testify remotely or even appear via hologram.

Will XR become a standard investigative tool or a staple of the court/legal system in the future? There are a number of hurdles that could hold back immersive technology indefinitely in law and order; including technical issues, high costs (one party may not be able to afford a VR exhibit), judicial opposition (the judge, after all, has final say on what is permissible in the courtroom), public acceptance, and fears around how the technology will affect impressionable jurors. There are also plenty of logistical issues to consider: Who would supply the hardware? Would courthouses need to devote space to expensive cave automatic virtual environments? What about content? The tech industry would have to team up with accident reconstructions, biomechanical engineers, medical examiners, etc. How would smaller police departments pay for and implement VR systems to train officers or AR glasses to aid detectives combatting crime and terrorism? How might criminals and terrorists ultimately exploit the technology? And are virtual courtrooms in our future?

The small number of use cases to date pose more questions than promises. While the tech continues to advance, let’s hope that at the very least we’ll be able to watch Jerry Orbach in VR!