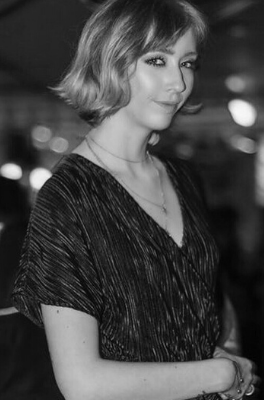 https://drive.google.com/open?id=1fy9bbEsS2I7J0jv09uhA3KJycsk0kc6pFor five years, Max has traveled the world, researching methodologies of dissecting thought. Eventually, she focused her research on utilizing Virtual Reality for empathy building and bias diminishing. Max is dedicated to the utilization of immersive technology to build empathy through story-telling of peoples’ self-determined narratives. She has been working with FXG, a China-based XR production, hardware and market entry company for two years. In early 2019, Max moved to NYC to establish the North American branch of FXG with a focus on helping to put immersive technology into the hands of the people. She lives with a photosensitive seizure disorder and is an advocate for neurodiversity inside of the tech industry.

Callie is the founder of the first immersive mental wellness studio. She has launched and operated innovation labs, accelerators, and hackathons for organizations that include the United States Department of Defense, NYU, Amazon, and the Tri-Institutional Program at Weill Cornell Medicine, The Rockefeller University, and Memorial Sloan Kettering Cancer Center and more. She coached 100+ early-stage digital health entrepreneurs on their path towards growth and fundraising and went on to launch a coworking space’s new location in NYC. Callie was a participant in the 2018 Oculus Launchpad program.

Vivian Chazen bridges different areas of the XR industry to help grow community while collaborating in unique projects. She works in the healthcare sector doing research with VR applications among older adults. Vivian created one of the first VR production companies called The Hive which is joined with VRespawn as a media marketing powerhouse. In the competitive VR esports scene, Vivian is captain of The Killettos.