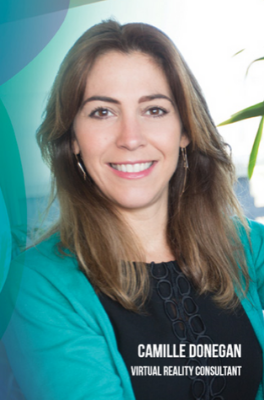 Camille is passionate about empowering artistic communities to have the skills to work with the new technology storytelling mediums of VR and AR and aids to bridge the gap between the technology and arts sectors. She believes magic can be created when these two ways of thinking and being come together to collaborate and co-create.

Since discovering virtual reality in Jan 2015, and realising the potential for this immersive medium, she has been researching, developing concepts and producing both virtual reality (VR) and augmented reality (AR) content for a variety of sectors including Healthcare, Training and the Arts. See examples of projects produced on behalf of Virtual Reality Ireland here: www.vr.ie

Camille, along with Virtual Reality Ireland are partnered with Irish National Opera as the VR producers for a 3 year European Union funded project called TRACTION which aims to break down barriers relating to Opera. Camille is the primary XR workshop facilitator and is researching how VR creation and co-creation tools can be applied to the process. Jo Mangan is the director of the VR Opera that will be created in year 3 of this project.

Camille is also working with Jo Mangan on the production of a new theatrical experience that combines live performance with an immersive Virtual Reality world, called Emperor. This show is due to be staged at the Dublin Theatre Festival in October 2020 and also at the Expo 2020 in Dubai.

Camille created and curated Ireland's first VR strand at an arts festival for Carlow Arts Festival 2019. This consisted of a VR Cinema, an interactive strand and several talks and workshops.