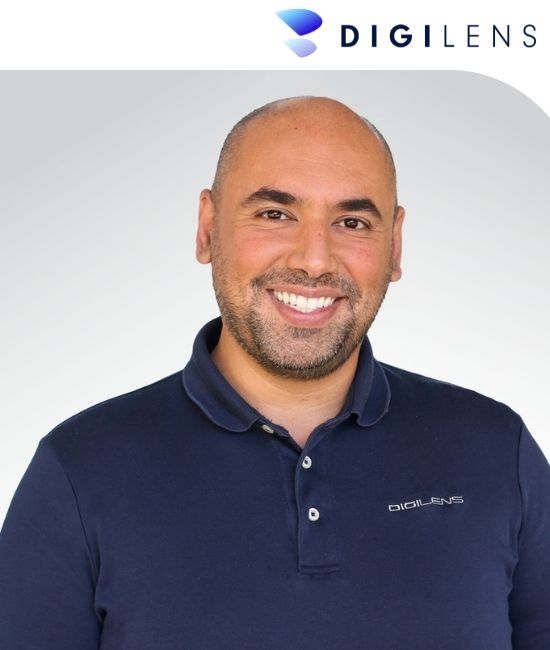 Nima Shams is the Vice President of Product Engineering and Management at DigiLens Inc., the leader in holographic waveguides used for augmented and extended reality (XR) displays. With 15+ years of experience in creating cutting edge, disruptive platforms, Nima’s diverse background along with his unique understanding of the wearable and head worn industry is helping to define the next mobile computing category by leading a team of multidisciplinary experts who are just as passionate as him and believe that DigiLens is the missing piece companies large and small have been waiting for. Regarded as a creative thought leader in the XR community with 20+ patents and cited in 200+ publications, he is responsible for driving product ideation and development for next-generation XR devices at DigiLens. Before joining the DigiLens team, Nima was the Head of Advanced Product Development and Chief Engineer at RealWear where he defined future product roadmaps and advised the executive staff on their XR developments. Prior to RealWear, Nima spent over 8-years at Osterhout Design Group (ODG), as their Vice President of Head Worn Products. During his time there, he built 16+ head worn platforms and shipped thousands of units to both consumer and industrial verticals. He helped foster the XR developer community and got major industrial partners to join him in shaping the mobile computing landscape such as BMW, Qualcomm, and many more. Today, Nima serves as one of the youngest IEEE MTT Governing Chairs for the Silicon Valley and San Francisco regions. He holds a master’s in electrical engineering from Santa Clara University along with a Bachelor of Science in Electrical Engineering from UC Davis.