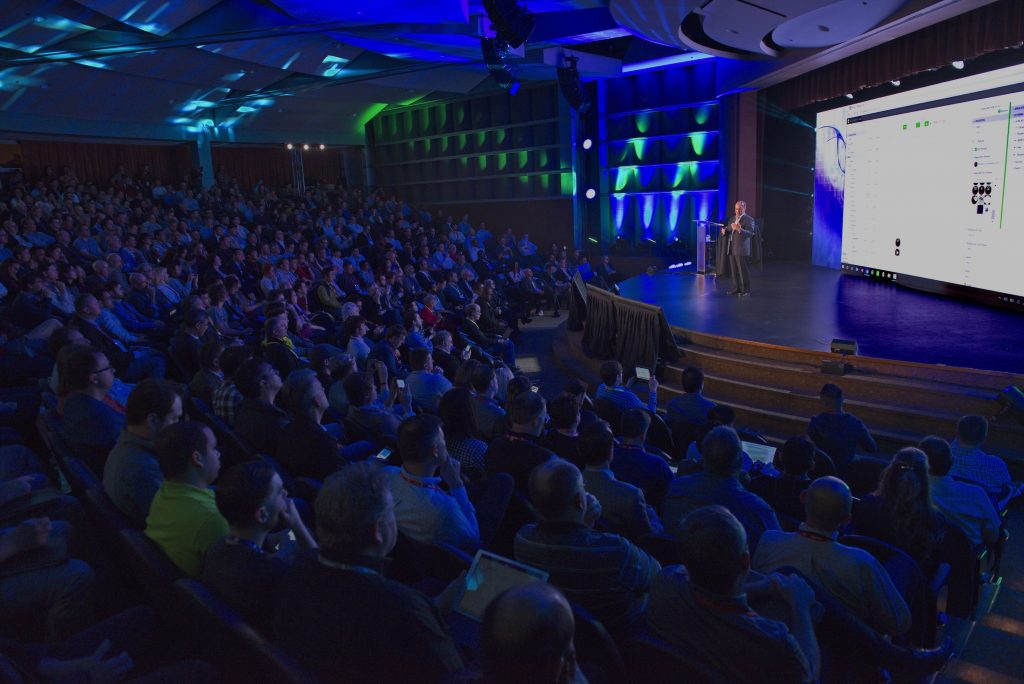 AWE USA is back for its 9th year in Santa Clara, CA with 6 stages across 3 days of conference and expo, including developer and creator workshops, main stage talks, startup pitches, and presentations and case studies on how XR is changing work and life.  With 350 speakers expected at this year’s event, AWE USA 2018 is sure to hit on all of the major themes and topics crucial to the continued advancement and growth of the XR space. We’ve highlighted just 10 of the hot topics you can expect at this year’s show:

Blockchain, the technology behind cryptocurrency, allows for the secure online exchange of goods and services independent of a third party. Many experts and futurists believe that blockchain will be the basis for trust – and with that, the answer to identity verification and a means of consensus or governance – in the Metaverse. Experiments are already taking place in multiplayer VR gaming in the form of virtual economies and virtual property ownership. Blockchain can also help establish virtual intellectual property, incentivizing developers to create content by allowing them to protect and profit from their work, and even serve as a way to authenticate users who may assume different avatars using XR technologies.

The current app-based AR and VR experiences are certainly powerful but the need to download content causes friction, which impacts adoption and overall use. While still in its infancy, WebXR will allow developers and artists to create web-based XR content that would work from all mobile and desktop browsers on any Internet- and XR-capable device, bringing XR to millions more users. Google and Mozilla are among the big tech companies currently working on WebXR in order to make it easier to create, deploy and access XR experiences right from your web browser. The two previously collaborated on WebVR, a JavaScript API providing support for Virtual Reality devices on the web.

In order for augmented reality to reach its full potential, we need to be able to align digital content with the physical environment on a global scale. To do that, we need to build the AR Cloud, an index of the real world – a virtual, one-to-one scale model – that updates in real time and that machines can read. Our AR devices will interface with the AR Cloud, enabling AR apps to understand and interact with real people, places and things. Like a 3D map perfectly overlaid onto the physical world, the AR Cloud will let us pin content to specific locations and have powerful shared experiences.

Diversity, Equality and Inclusion in XR

If XR is going to be as transformative as we imagine, it will require effort and input from all voices. As a community, we need to make a conscious effort to include the ideas and problem-solving abilities of people of all gender identities, sexual orientations, ethnicities and socioeconomic backgrounds, along with multidisciplinary expertise. Diversity should be at the forefront of all decisions, coding of systems, and solutions. This is especially critical as we teach our computers how to see, talk and behave. It is also essential seeing that XR technologies are creating new worlds and environments which must be constructed with diversity, inclusion and equality at their centers.

There have been great advances in AI in recent years thanks to increasingly faster, cheaper and more powerful processing and storage of large quantities of data. Machines are now able to learn, recognize, track and translate at a speed, accuracy and scale driving true artificial intelligence. Neural networks and deep learning have played a crucial role in improving image and object recognition, computer vision and other essential building blocks of XR; and we are beginning to see the potential of combining XR interfaces with AI systems like IBM Watson, Amazon Alexa, and others. AI is also starting to play a critical role in the creation of content, powering characters and avatars that will entertain, inform and educate us.

The Role of 5G in XR

Augmented and Virtual Reality are pushing the limits of connectivity today, requiring greater bandwidth and lower latency than 4G can deliver in order to reach their full potential. The next generation of XR experiences will include video streaming inside semi- and fully autonomous vehicles, social media sharing from crowded venues, 6DoF video, remote control of machinery, and the Tactile Internet—applications that will challenge mobility and capacity requirements for wireless streaming and send individual data consumption skyrocketing. The future of XR is critically linked to the rollout of next-generation 5G networks.

While phones are the way most people experience augmented reality today, AR will ultimately move from mobile handsets (and mirrors in fashion and beauty stores) to wearable devices like smart glasses, replacing the need for all our contemporary screens. It will take more than a few baby steps, however, to go from holding our phones in front of our faces – and sometimes inserting them into head-worn frames – to ditching the handheld device altogether for lightweight, ever-present HMDs. Key challenges that remain are both technical and social. They include cost and form, display technology, real-time spatial mapping and 3D modeling, UX/UI, battery life, connectivity, content, and privacy and social concerns.

As we move away from 2D screens to interfacing with the digital world in 3D, new and more natural modes of interaction will be necessary. The next wave of computing is ushering in a new set of controllers that move well beyond the mouse; leveraging our hands, feet and the rest of the human body to facilitate movement and action within XR environments. These new methods of interaction will require an entirely new user paradigm defined by content creators. In addition, as XR often requires the user to wear technology, this lends itself to a new set of inputs enabled by biosensors that track physiological data. Eye movement, heart rate, brain activity and even emotional responses are now available for content creators to use as triggers for eliciting action and even shaping entire experiences in XR.

XR and the Future of Vehicles

From drones to autonomous vehicles; computer vision, virtual reality and augmented reality are playing a critical role in the creation, operation and overall experience of tomorrow’s vehicles. In virtual reality, visualization tools are making the design and prototyping of vehicles easier, more affordable and more compelling, and customizable simulations have become an effective sales and marketing tool. Augmented reality is making its way into car windshields and motorcycle helmets and giving drone users an eagle’s eye view, all with the aim of making operating vehicles easier, safer and more enjoyable.

With $3 billion dollars invested in AR and VR in 2017 (according to Digi-Capital,) investors are eyeing XR as an area of investment activity and seeding capital into startups building hardware, core technologies, tools, content and more. And things are just getting started. With the launch of new VR headsets, especially higher-performing, lower-cost alternatives, and the rollout of mobile AR platforms such as ARKit and ARCore; the market opportunity for XR has grown exponentially, making the investment opportunity even clearer and more enticing.