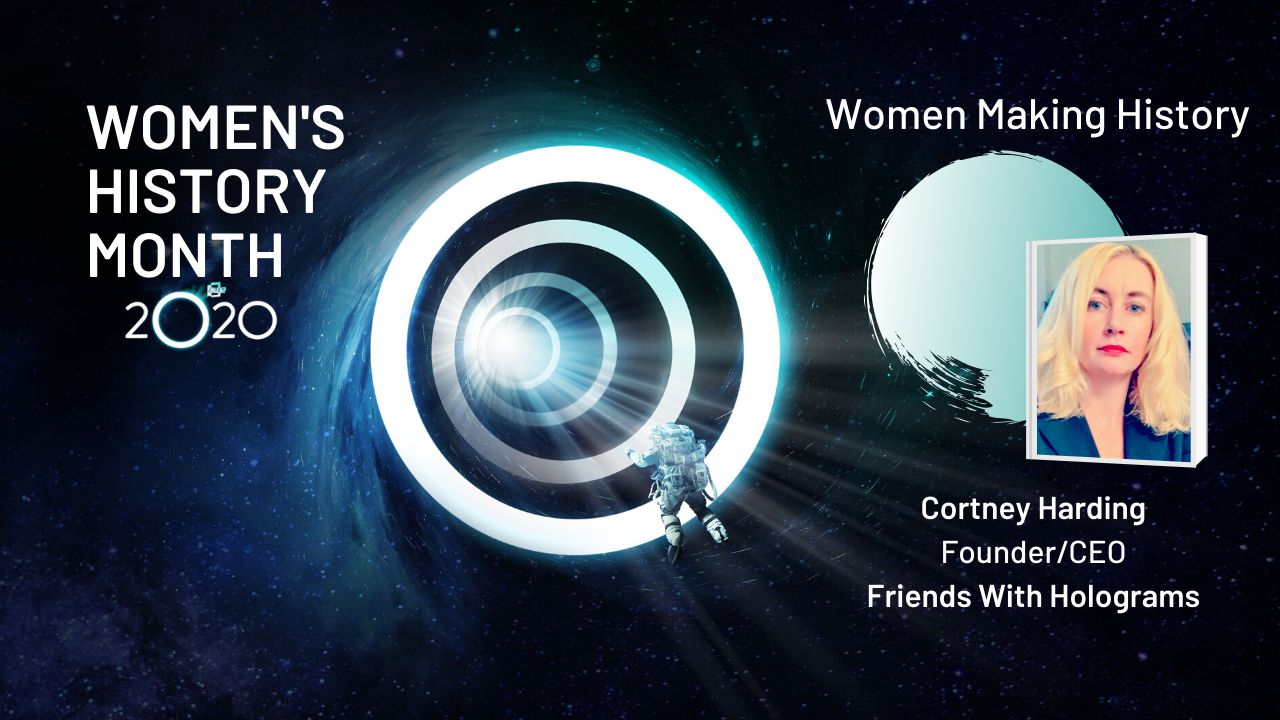 Sorry, boys; the women of augmented and virtual reality are killing it. Nevertheless, the immersive technology industry has a ways to go towards gender equality. As in the technology industry as a whole, women in XR typically receive less VC funding and occupy fewer leadership and technical positions compared to men. So, for Women's History Month 2020, we're interviewing real women who challenge the idea that the AR/VR industry lacks visible female role models. Enjoy!

1. To begin, could you provide us with a little background on yourself and your career? What does your job entail and what was your very first encounter with AR/VR?
Cortney: I started my career as a music journalist; I was a staff writer and then the music editor at Billboard. From there, I ran a consultancy helping international music tech startups launch in the U.S. About five years ago, I saw a VR piece by an indie musician at MoMA PS1 and was immediately hooked. I spent a year learning more about VR and writing several pieces about VR and music, and was on a panel at SXSW 2016, where I met a director who was launching his own production company. I joined him and ran their business development and strategy and then launched my agency, Friends with Holograms, in late 2017. I run the agency, so I do pretty much everything, from sourcing business and closing deals to leading the creative on VR pieces and overseeing production. Our work won Best VR/AR at Mobile Wolrd Congress, was a finalist for a SXSW Innovation Award, and was named a Top HR Product by HR Executive.

Cortney: I mean, it's the same sexism you find everywhere else. When I was working with a male colleague, people would ignore what I said and then defer to him. There is a great community of women in VR/AR but that alone won't overcome institutional sexism.

3. What challenges do you face that your male peers don't?

Cortney: Getting people to take me seriously. There are companies run by men whose work hasn't gotten the recognition that ours has, but they wind up on panels and getting deals because they know the right people.

Cortney: Oh yeah, all the time. Again when I was working with a male colleague, we went to an event and someone asked if we were married. I guess they couldn't believe a woman would attend a technical event except to support her male partner.

5. What about the user experience for woemn; how do today's XR devices fit and perform for women?

Cortney: It's getting better, but it's still not there. Headsets are still primarily designed by and for men and don't fit female faces as well; they also don't take into account women's hairstyles (to be fair, nor do they account for Sikh men who wear turbans). Most of the big VR companies are run by men who come from gaming backgrounds, and boy oh boy does it show.

Cortney: There's a lack of content, period, and headset companies are doing themselves a huge disservice by not doing more quality control and investing in indies who make good content. I don't need pinkwashed VR; I need excellent content that clearly establishes perspective and tells a great story.

7. What is your advice to women who want to break into AR/VR?

Cortney: Go to events and meetups and establish your value in the community. Whatever you're doing now, a VR company probably needs your skills, especially if you're not technical. And you should be making things, even if you're not technical--buy or borrow a 360 camera and start making stuff. Even if it's terrible it'll help you learn about spatial thinking. Having a portfolio will really set you apart.

8. What would you like to say to men in the space? What should they be doing to help women in tech?

Cortney: Book women on panels, hire us for jobs, promote our work. If you're booked to speak at a dude-heavy event, give your spot to a woman, preferably an indie creator with a different perspective. Don't talk over us. Don't dismiss our accomplishments (I just had a man claiming to be an advocate for under-represented people in the space tell me my awards are worthless). And be an ally by not working with men who have had credible allegations about assault leveled against them.

Cortney: The most critical issue for anyone in AR/VR in the next decade is creating good content so the ecosystem can grow and evolve.

Cortney Harding is a global thought leader, published author and speaker on emerging technology and the role of virtual and augmented reality. She is the founder and CEO of a transformational VR/AR agency focused on creating innovative, powerful and effective experiences for training. Clients include Walmart, Verizon, Accenture, Coca-Cola, and the U.S. Air Force. She is also the winner of multiple awards, including "Best in VR/AR" at Mobile World Congress, SXSW Innovation Award Finalist, and Top HR product by HR Executive.
See all posts