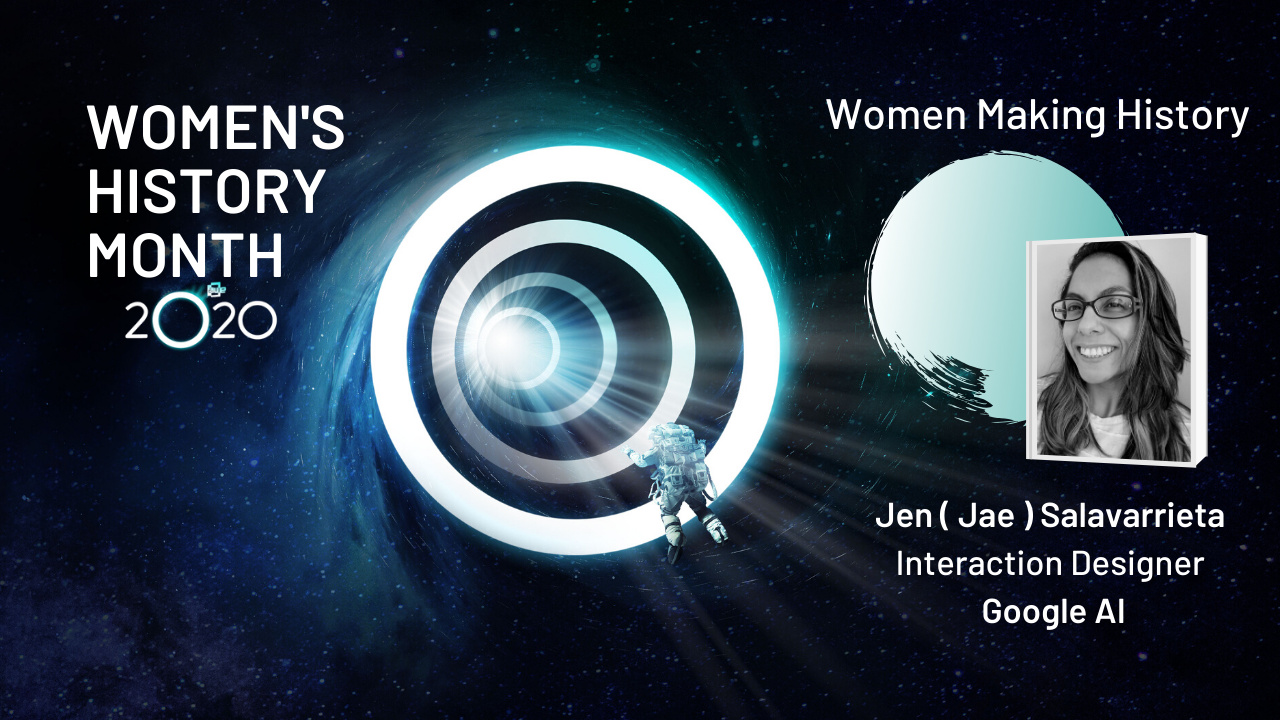 Sorry, boys; the women of augmented and virtual reality are 'killing it.' Nevertheless, the immersive technology industry has a ways to go towards gender equality. As in the technology industry as a whole, women in XR typically receive less VC funding and occupy fewer leadership and technical positions compared to men. So, for Women's History Month 2020, we're interviewing real women who challenge the idea that the AR/VR industry lacks visible female role models. Enjoy!


1. To begin, could you provide us with a little background on yourself and your career? What does your job entail and what was your very first encounter with AR/VR?

Jen: I started out with traditional art because design wasn't really considered a career path where I grew up. Having never had access to Adobe or any design programs, going to a tech college was a real eye opener. No one expected me to even get into college (I really hated school), so I gambled on what seemed interesting to me and it ended up being one of the most challenging programs for design.

I graduated from the New Media Design program at RIT (Rochester Institute of Technology). If not for this program, I wouldn't have the knowledge and skills to exceed at what I do now. At the time I graduated, VR/AR was only done in research and not commercially, so like most digital designers I first worked in advertising at creative agencies and startups. Fatefully, a recruiter reached out and matched my skillset with Blippar, where I led and helped execute customer AR and VR mobile campaigns. My background allowed me to adapt to a brand new cross functional workflow. Now, I work as an interaction designer with Google AI, focusing on VUI (voice user interface), language and conversations in a research space. I also just started teaching after work hours as an adjunct instructor for NYIT (New York Institute of Technology). I teach UX/UI for VR/AR/MR.

My first encounter with AR/VR was actually back in college. I would watch all the highlight videos from SIGGRAPH and there were Johnny Lee's experiments on the Wii. I was always fascinated by the tech at SIGGRAPH but it felt so out of reach. Johnny Lee made it more tangible, using a system I could easily find on my campus. I ended up using that for a senior group project where we tried to walk through a virtual room. For some reason even after all that, it didn't occur to me that I could pursue spatial design as a career right out of college.

Jen: I feel AR/VR 'happened' at the right moment in time, as women have become more of a driving force in technology and taken on more lead positions. That's not to say that internal/external struggles don't exist; it all depends on who you surround yourself with. I've been lucky to avoid companies that show bias or disregard for women employees, and I feel that VR/AR hasn't been as much of a typical male-dominated industry as other areas of tech. I've personally seen some of the most diverse teams in this space. I don't foresee male-only groups lasting long in the AR/VR race.

Jen: It's hard to answer this question, maybe because I'm a designer in NYC. Just in my own experience, I think it's more challenging for women managers and developers. As a designer, you're typically judged based on your skills and portfolio. You'll always bump heads with people regardless of gender and on past teams, I have felt that delivery and qualitty expectations were higher for me than others. My own challenges have been mostly internal, questioning if what I delivered is good enough, if I'm missing something, whether I considered everyone's ideas, etc.

Jen: Looking back, I've had struggles coming from a very low-income family. I was bullied immensely in childhood, but even so I cannot remember a time in my career that I've been judged based solely on my gender. I've been lucky in that respect and have always been surrounded by strong women. Even back in college, there were some majors dominated by men but in my major the top developers and designers were women. In every job, I've either had a woman manager or there were strong women leaders in other departments. I can recall a male project manager who seemed to prefer the company of other men for offsite meetings and client calls. There were a few situations, but it wasn't someone I'd want to accompany to a meeting anyways.

Jen: With the many women leaders in XR, more and more immersive experiences are inclusive to women. We'll probably see even more tailored experiences in the near future. We're already seeing women-only spaces in VR rooms and I can see this being really helpful in medical, court and counselor situations. I think there are actually more issues in terms of accessibility of the technology for disabled individuals. I hope women will lead on this, raise these concerns and change the way XR devices are made for all human beings.

Jen: Looking at this question from a UX perspective, I can't help but ask "what is the definition of content for women?" This is limiting. It's like saying what is 'suitable' for men versus women, and who gets to make that decision? There are spectrums of people. We shouldn't repeat what our male predecessors did. We should instead lead by example and show how XR can be inclusive for all genders.7. What is your advice to women who want to break into AR/VR?Jen: A) Don't limit yourself to only one tool; learn about the whole process. B) If you're not used to, say, an animation, game or film workflow, then working on AR/VR might feel overwhelming. Don't set yourself up to fail by thinking there are only one or two absolute programs to use. In this industry, you need to be familiar with any and all. Not saying you have to be a master of everything, but every member of the team should be aware of how everything works and what's needed. For example, you're going to feel a bit lost if you don't know any 3D program terminology. C) There is an enormous and growing support system for women in XR, especially online. I'm not saying you should just relax; you still need to speak up and work to strive further and reach farther than what we think is possible not just for yourself but for all the girls growing up now and yet to come into this world.

8. What would you like to say to men in the space? What should they be doing to help women in tech?Jen: I don't think we should expect people to change, especially when they've been like that for decades. But we should all be adult enough to compromise and keep it professional in the workplace. Treat others like you want to be treated. If a woman says you're acting unprofessionally or doesn't like your joke, ask yourself if she has any reason to lie to you? We're all raised differently so judge people on their work ethics and skills, not gender. It's a small world and you may meet each other again.

Jen: It will be critical for women to get their foothold in where it counts by founding startups, writing articles, making appearances in media (podcasts, TV) and at conferences. As more viewers see women as part of this industry, we become the face of it.

"Even after 10+ years taking in all the hustle and bustle in NYC, I still find myself learning new things and expanding my skill set as a designer in emerging technologies. I love challenging myself, clarifying and organizing ambiguous projects, and leveraging user experience research to the fullest extent."
See all posts