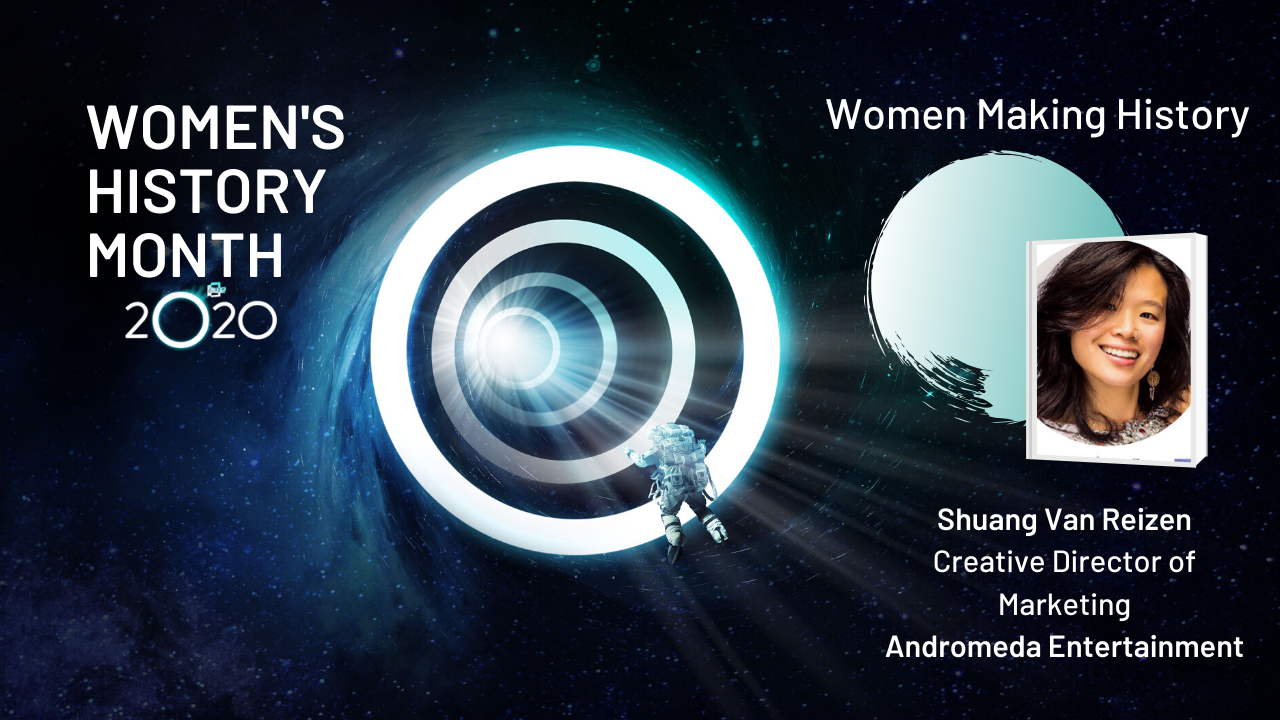 Sorry, boys; the women of augmented and virtual reality are 'killing it.' Nevertheless, the immersive technology industry has a ways to go towards gender equality. As in the technology industry as a whole, women in XR typically receive less VC funding and occupy fewer leadership and technical positions compared to men. So, for Women's History Month 2020, we interviewed real women who challenge the idea that the AR/VR industry lacks visible female role models. Our final inspiring woman in XR is Shuang van Reizen--enjoy!


1. To begin, could you provide us with a little background on yourself and your career? What does your job entail and what was your very first encounter with AR/VR?

Shuang: I am an avid traveler, fire spinner, and citizen of the experiential city in the Black Rock Desert. Since the release of Oculus Quest, I've been experimenting with the potential of being a digital nomad while working in XR. I'm a creative futurist mixing performance art and new tech as a way of self-expression and an amplifier in the VR space for experiences that invoke flowstate, but I think I'm most known for my performance in the viral "If You Want to ESCAPE with Me" Beat Saber video that gained over 100 million views--the proudest accomplishment from my previous role as Ready Player Swan at the mixed reality company LIV. Currently, I am the Creative Director of Marketing at Andromeda Entertainment, a consicous game publisher, working on launching immersive experiences that emcompass dance, meditation and inner exploration. My job entails partnership marketing, collaborating with content creators, and empowering new explorers into the VR space.My first encounter with VR was an Oculus dev kit back in 2012 in NYC--the iconic Tuscany experience. The most impactful early encounter was my first Vive experience at Symbiosis Festival with Android Jones' MicroDoseVR. That was the moment I decided to make VR a part of my destiny.

Shuang: As a creative, I have always stood out from the crowd. Being a woman in AR/VR is really an extension of my previous experience of being a woman in banking. I was valued for offering unique perspectives and the opportunities presented to me due to being different from the majority I think gave me an advantage.

Shuang: When I was going viral with Beat Saber, I got a lot of attention from random men on the Internet. It made me social media shy.

Shuang: So far, I've been so fortunate in surrounding myself with super supportive people. If anything, I've been asked to lead more by my team.

Shuang: I am still waiting for an XS of the Tesla suit. There are still some haptics that are made without consideration of smaller sized beings. Usually, when I put on a headset, I have to adjust the straps to the very smallest size.

Shuang: Content is gender neutral; thus, I don't think there is a lack of content for women. I do believe, however, in promoting non-violent games. At Andromeda Entertainment, we are launching meditation VR, SoundSelf, and dance VR, Audio Trip. Both of these titles are gender neutral, with Audio Trip just being a bright and flowy movement/dance game that does have a higher appeal to females. SoundSelf is a meditation game, probably the most anti-violence game to come out this year. Both of these titles can be labelled as more feminine but content doesn't discriminate or segregate; that comes from our social conditioning. Women can play shooter games, too. 7. What is your advice to women who want to break into AR/VR?Shuang: AR/VR needs more diversity of thought! Figure out where your passion lies: Is it in development? Developer relations? Creative strategy? Figure out the work that will make you happy to wake up every day, then go out and do it.

8. What would you like to say to men in the space? What should they be doing to help women in tech?Shuang: Be more compassionate when it comes to interacting with someone with less technical know-how than you. Learn to be a great mentor and nurture the people around you in order to grow a healthy VR/AR community.

Shuang: Being able to raise funding for a female-led startup to get to series D or above.


Shuang is a creative futurist mixing performance art and new tech as a way of self-expression. Known as an amplifier in the VR space for experiences that invoke flowstate, Shuang is most famous for her performance in the viral "If You Want to ESCAPE With Me" Beat Saber video that gained over 100 million views. The proudest accomplishment from her previous role as Ready Player Swan at the mixed reality company LIV. Currently, she is the Creative Director of Marketing at Andromeda Entertainment, a conscious game publisher focused on launching immersive experiences that encompass dance, meditation, and inner exploration.
See all posts