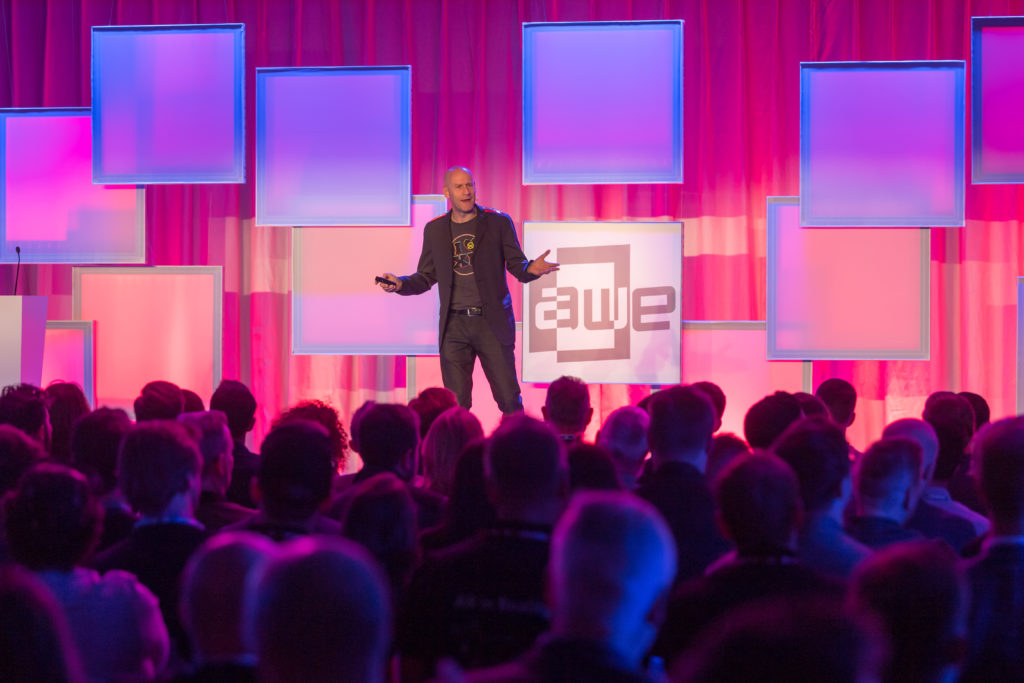 From the main stage to the expo hall and everything in between: What went down at AWE EU 2019

After two days of panels and presentations across six tracks, newsworthy announcements from industry leaders, lots of demoing at exhibitors’ booths (and even in the hallway), and the #AWE2018 hashtag trending on Twitter in Germany; the third annual AWE EU is over. We hope you came away from the event with a picture of yourself wearing the Magic Leap One (or at least a selfie with a dancing painted avatar), a signed copy of Charlie Fink’s book Metaverse, plenty of new contacts, knowledge and inspiration, and new immersive experiences. While it’s impossible to recap the entire two days of the conference and expo, here are as many event highlights as I dared to fit in a single blog post.

AWE EU 2018 kicked off with AWE Co-founder Ori Inbar’s State of XR keynote. Ori set the stakes for the event, warning that if you don’t “go XR,” you will go extinct. On the Day 1 Main Stage, PTC’s Mike Campbell announced Vuforia Chalk and a new report with Aberdeen; Tim Merel (Digi-Capital) shared some surprising findings on the European XR market; author and envisioneer M. Pell (Microsoft Garage) described the coming Age of Smart Information; Charlie Fink said “people are the killer app;” a panel addressed the lack of diversity in XR, and more.

Elsewhere in the MOC, major themes emerged across the Enterprise 1 & 2, Develop, and Life Tracks—themes like the challenge of content authoring for non-developers and organizations lacking an existing 3D content catalog; the need for an open AR Cloud; the power of XR for training and remote guidance/collaboration; and the use of XR by automotive companies, big pharma, and teachers.

The AWE EU 2018 Press Conference also took place on Day 1, with announcements from PTC, Vuzix, RE’FLEKT, Upskill, eyecandylab, and Bosch. The Open AR Cloud Initiative (OARC) launched at the event and had its first working session live on the Develop Track. A little later in the day, representatives of VWVR (VWVR.org) launched the Vision for Women and Virtual Reality statement. Companies also took the opportunity to announce new products and partnerships during talks on both days of the event.

Inside the expo, attendees tweeted about devices and demos they saw: “Lots of astonishing technologies we’ve seen on the first day at #AWE2018. Positive mention to Visionaries 777, Aryzon, Fraunhofer and Volograms.” @JouseMarquez

Walking around the expo floor, there were, of course, many smart glasses and VR headsets, as well as the the latest object recognition and tracking tech, new content authoring solutions, remote guidance demos, and interaction devices. There was even a VR-enabled foosball table by Koliseum Soccer VR, which was brought to AWE by the local VRARA chapter and ended up winning the Auggie Award for Best in Show VR!

If you attended any of the Bosch sessions on Day 1, then you were probably eager to try the solutions Bosch developed with RE’FLEKT to accelerate vehicle workshop repairs; and I bet you also visited RE’FLEKT, where people were lining up for the Charlie Fink book signing and then staying for demos: “Falling in love with RE’FLEKT’s platform for creating AR apps. It’s DIY!” @GerailooMahdi

Vuzix, too, made a great impression with the Vuzix Blade, its lightweight, Oakley-style smart glasses featuring waveguide-based, see-through optics and voice control. Shipping next month, the Blade could very well be the first successful pair of consumer AR glasses. Just take Twitter user @jens_augustin’s word for it: “The Vuzix Blade really feels like the first of a breed of next gen AR devices that users would want to wear for an extended amount of time, which is critical for user uptake."

Crowds stood out at Atheer, where serious enterprises went to try Atheer’s AR Management Platform on a range of devices; and by ScopeAR, where booth-goers heard about real use cases with hard ROI. Francesco Benvenuto’s presentation on the Enterprise 2 track sparked a lot of interest in OverIt’s space1 virtual collaboration platform; while Upskill’s announcement of Skylight for Mobile and the Skylight for HoloLens global early access program created a surge of attendees wanting to try Upskill’s signature platform on more devices. Attendees found eyecandylab’s new augmen.tv platform entertaining and promising; and were impressed with Wikitude’s object recognition technology and Holo-Light’s Holo-Stylus, which enables precise interaction in AR.

Elsewhere in the expo, Visionaries 777’s German engine demo used a tablet to view a real engine inside a digital motorcycle; and Glue launched its virtual collaboration platform. Wearing an HTC Vive at Glue’s booth, I entered a virtual space where I could draw in the air and talk to robot avatars of real people who were using a variety of devices. There were also a few opportunities around the expo - at WEKIT’s booth, for one - to try technology actually in use aboard the ISS (in space!)

Day 2 opened with Jay Kim (Upskill) and Omar Castillo (GE Measurements & Controls) on the Main Stage talking about finding points of entry for AR devices. Some critical questions you should ask: How mobile do you need to be? How hands-free? Also on the main stage, Johan Casteval (XMReality) brought up the emerging trend of “servitization” in the AR industry (think SaaS but AR); Philipp Nagele demonstrated how to build your own AR Cloud with Wikitude; Kip Haynes presented on the future of XR at IKEA; Lance Anderson led a panel discussion with Christian Merz (Daimler AG) and Marcus Kuehne (Audi AG) on the why, how and challenges of XR in retail; and Terry Schussler (Deutsche Telekom) told us that 5G will become a reality in Europe late next year (!).

Many key tangential technologies to XR were addressed on the last day of talks, such as machine learning, edge computing, holography, 5G and webXR. In addition, themes around getting started with AR quickly, including a bunch of “build your own” sessions, training and learning in XR, XR in the automotive sector, user behavior and experience, and bringing products and information to life with AR carried over from Thursday to the Design, Enterprise 1 & Enterprise 2 Tracks on Friday.

Casper Fabricius (Cimmerse) closed down the Main Stage, advising attendees to “set your content free with WebXR,” and then it was already time for the Auggie Awards and the conclusion of AWE EU 2018.

This year, AWE along with IEEE and VRFirst introduced three new categories to the Auggie Awards. The Breakthrough Auggie Awards and Best in Show winners who each received a prestigious Auggie trophy as well as an Aryzon AR headset were: