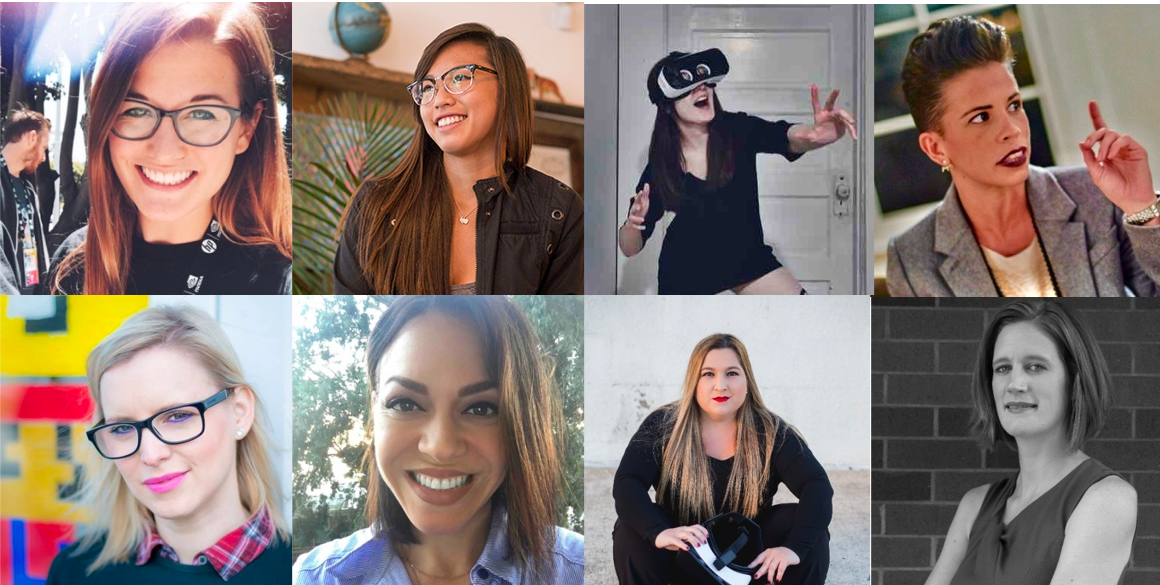 Here at AWE, we’re celebrating Women’s History Month with a 4-part “Women in AR+VR” blog post series. We launched the series on International Women’s Day by paying homage to 8 women pioneers who paved the way for today’s women in XR. Below we highlight 8 community builders and influencers—dedicated women who are using their diverse and unique backgrounds, positions and skills to bring women together and raise them up in the world of XR. On top of founding and leading communities to promote gender equality and increase diversity in tech, the following women are also esteemed speakers, advocates, authors and mentors inspiring the next generation in augmented and virtual reality.

A serial entrepreneur and investor, Martina Welkhoff is a Founding Partner at WXR, a venture fund focused on women-led VR/AR companies, as well as a Venture Partner at Jump Canon, another venture firm that invests in unconventional and underrepresented founders in emerging tech. In both positions, she provides not only capital but also community infrastructure and mentorship to women leaders and entrepreneurs of diverse backgrounds. Martina sees inclusivity in innovation as necessary to solving the complex problems of our time. She is also a World Economic Forum Global Shaper, advisor to the Center of Leadership & Strategic Thinking at the University of Washington, and board member of Seattle Angel.

Malia Probst has been named one of the Top 20 Most Influential People in VR/AR, one of the Top 20 LA Women in VR, and one of the Top 100 Global Digital Influencers. These accolades are well-deserved, for as a Founding Partner at both WXR Fund and VRScout, one of the world's leading immersive media companies; and as host of two of the top VR/AR podcasts, her reach is over a hundred million people internationally. Balancing her roles as venture activist, speaker and podcast host, Malia inspires a global community of explorers and creators every day.

Cathy Hackl is a VR/AR evangelist at HTC Vive, a global speaker and “marketing futurist,” and co-author of Marketing New Realities: An Introduction to VR & AR Marketing, Branding & Communications. She was a journalist for CNN and ABC News before entering the world of XR, and collaborated with the likes of Sony Pictures Entertainment and Oculus while at top VR studio Future Lighthouse. A trailblazer in using new technologies to tell immersive stories, Cathy has been named a leading VR/AR influencer by Onalytica and one of the top Latina women working in VR by NBC News. She’s also the founder of Latinos in VR/AR, a virtual community that connects and empowers Latino innovators in augmented and virtual reality. As an advisor and board member for a number of organizations like the VR AR Association, Visual Storytelling Institute (VSI) and VR AMERICAS, Cathy is helping to progress the virtual revolution and shape the future of marketing.

Co-Founder and Chief Marketing Officer of cloudHQ, a company that makes Gmail productivity tools for major clients like Uber and HP; Naomi Assaraf is also an administrator for the growing ARVR Women and Allies group on Facebook. Groups like ARVR Women and Allies, which provides a platform for over 4,000 women and their allies, are vital to the Women in Tech movement. In these forums, women can share their experiences, find support for their ideas, celebrate their accomplishments, and network to discover new business opportunities. In addition to three-time profitable startup founder, Naomi is a global keynote speaker, Huffington Post contributor, and VR developer.

Julie Young is Co-Founder and CEO of SH//FT, “a community-driven company that celebrates and promotes diverse voices in the VR/AR industry” through scholarships, mentorships, workshops, spotlight programs, and events. But her efforts to support women and other underrepresented groups do not stop there--Julie also co-runs the Women in VR/AR Facebook group, which boasts over 9,000 members. She previously worked on the Spectacles team at Snap, Inc. and at Emblematic Group, where she produced two room-scale VR experiences that showed at the Sundance Film Festival.

Digital marketing and business consultant, Marija Butkovic is a founder and CEO of Women of Wearables, the first organization of its kind in the UK and Europe to connect, support and mentor women and girls in wearable tech, fashion tech, IoT and VR/AR. A STEM ambassador, member of Tech London Advocates and Google’s Women Techmakers, startup mentor and advisor, regular public speaker and blogger, and co-founder of her own wearable tech startup Kisha Smart Umbrella; Marija is definitely one of the busiest and most influential women in UK tech. Under her leadership, WoW has become a community of 10,000 members around the world—a veritable global movement to create more jobs for women in STEM and encourage more women and diverse teams to pursue careers in tech.

Eva Hoerth is a Mentor Fellow at the WXR Fund, a VR design researcher, and an expert in creating and managing shared virtual spaces. Believing diverse voices must be supported from the beginning if VR/AR are to succeed, Eva researches the nature of social interactions in VR to understand how to create comfortable and intuitive virtual worlds that foster friendships; and is an advocate for psychology and human factors in emerging tech design. Her work in this area and as co-organizer of the VR/AR Collective, Seattle VR Hackathon, and Seattle VR Meetup has earned her a spot in the top 50 VR influencers on Twitter. Before mentoring female founders at WXR, she worked as a Developer Evangelist at VREAL.

Jenn Duong is a young, independent VR director and most recently the Head of Virtual Reality at 1215creative, an L.A. production company where she directed a VR music video for musician Banks. In 2016 at age 20, she was ranked #22 on Onalytica’s list of Top 100 Individual VR Influencers and #11 on Haptical’s list of Top 40 VR Executives. She was also a Future of Storytelling Fellow, a featured creator in piloting the Google Jump Start program, and one of LA Weekly’s People of 2017. Committed to fighting for a change towards equality through community and VR content creation, Jenn makes our list as a co-founder of SH//FT in 2015 and current admin of the Women in VR/AR Facebook group.