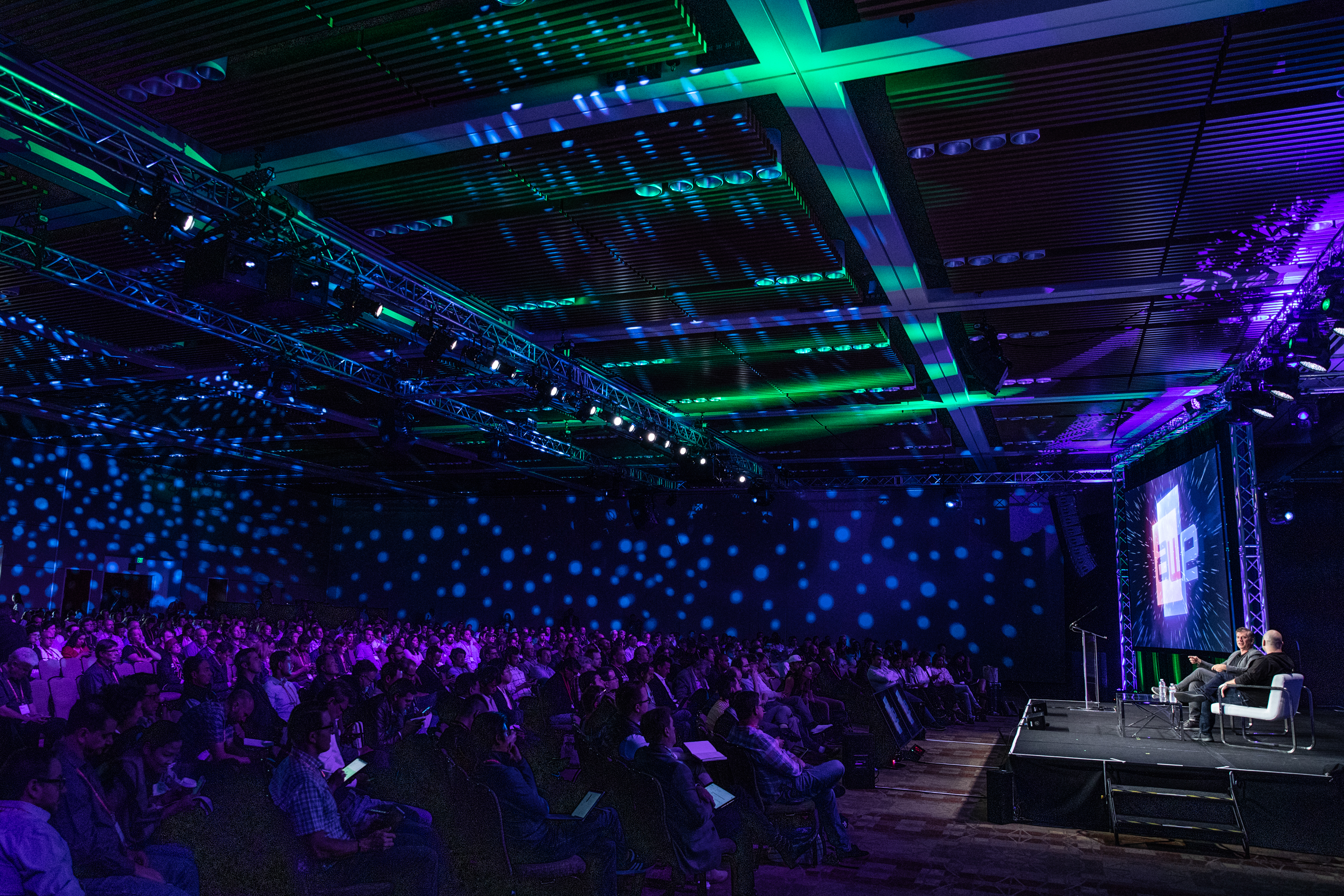 What a first day and an incredible start to the 10th AWE! There was a new optimism, persistent themes around 5G and storytelling, too many good sessions happening at the same time (sorry), and tweets like this one that make it all worth it. Here’s what went down on Day 1:

Ori Inbar kicked off the event by taking a look back at the last ten years of AWE, from the very first ARE in 2010 to now; and the community embraced the term spatial computing. Tim Merel (Digi-Capital) gave the second keynote, sharing surprising stats and revenue predictions for AR/VR, followed by PTC CEO Jim Heppelmann talking about AR as IoT for people and 10-year AWE vet Tish Shute.

New this year, the Marketing & Sales track – expertly chaired by Samantha Wolfe (We Are Phase2) – kicked off with a full house for Tony Parisi (Unity), who spoke about AR advertising and the need to get AR into consumer consciousness, and Meaghan Fitzgerald (Facebook), who told us that the future of VR is social.

On the Enterprise track, Kerim Ispir (RE’FLEKT) told the crowd to get started now with AR – “today could be too early for you, but tomorrow is definitely too late” – and David Nedohin (Scope AR) said that AR can make everyone an expert. To kick off the Develop and Creator tracks, Weiqi Zhao (Rokid) explained how to leverage your mobile skills for AR and M. Pell (Microsoft Garage) gave his new spatial design talk “Surfacing the Invisible.” One Twitter user quoted him saying “Time is the element most missing from data. Most data is just a snapshot in time.”

After a break, Allan Cook (Deloitte) took the main stage to tell marketers to turn consumers into the heroes of the story. He was followed by Vicki Dobbs Beck, who shared Lucas Film’s / ILMxLAB’s take on immersive entertainment and hyper-realistic LBE and a sneak peek at Vader Immortal. Google’s Austin McCasland and Diane Wang gave creators 10 tips to successfully rapid prototype, while JJ Lechleiter (PTC) spoke to enterprises on how to drive value for hardened industrial use cases and Joanna Popper (HP) led a panel of DreamWorks Animation speakers who have translated the How to Train Your Dragon franchise into two cool VR experiences. On the Marketing track, we heard about implementing XR for legacy sports brands with Michael Ivins (Boston Red Sox), Devon Fox (PGA Tour) and Jason Yim (Trigger Global) and were informed by Sally Huang that over two million people have used the Houzz AR app, making them 11x more likely to purchase. Addressing cybersecurity, Kavya Pearlman and Regine Bonneau (XR Safety Initiative) drew parallels to Star Wars, arguing the Galactic Empire should have cared while developing Death Star technology; and Aviad Almagor (Trimble) said that “it’s not enough to have the digital world developed; we must bridge the gap between the digital environment and the field.”

In the early afternoon on the Main Stage, EVP of Product Development and President of Sixense Studios Joel Breton spoke about the golden era of XR content; Chris Bobotis (Adobe) told attendees that “the story happens in the mind, not in the device;” and Michael Ludden (Bose) introduced Bose AR and Bose’s commitment to audio AR. All Bose devices going forward will support the Bose AR platform, and Bose is on track to ship one million AR devices by the end of 2019.

“I never considered I could meet my own creation until Quill.” – Goro Fujita (Facebook)

Creators raved about Goro Fujita painting live in VR, and Silka Miesnieks (Adobe) challenged the AR/VR design community to re/learn human behavior, not just computer to computer communication. On the Dev track, Andrés Ornelas and Coby Palivathukal shared what they learned from building the Spatiate app at AcrossXR and gave a live world creation demo; and Zappar CTO Connell Gauld gave a special ‘WebAR for Everyone’ workshop. In XR Enablement, Carolina Cruz-Neira (Emerging Analytics Center, UA Little Rock) talked about the history of VR innovation; Sankar Jayaram and David Aufhauser (Intel) discussed the future of sports media; and Hiren Bhinde and Prince Gupta (Qualcomm) gave a joint presentation in front of a packed room about the importance of 5G.

The Enterprise room was standing room only for Paul Davies presenting about Boeing’s proprietary AR solutions, which have led to 20-25% more efficiency and an 80% reduction in errors; followed by Jay Kim (Upskill) speaking about the qualitative benefits of AR in enterprise. After Jay, Jan Pflüger (Audi) talked about the connection between consumers and enterprise and attendees learned about a comprehensive smart glasses solution by Proceedix and AMA Xpert Eye.

XR Enablement talks by Dean Slawson (VRAINIUM) and Bill Parker (Creative Microsystems) packed the track room, where to close out the day, Chris Nunes (Heavy) talked about the future of blockchain and AR and Joshua Ness (Verizon 5G Labs) advised listeners on what to do when 5G renders their content obsolete.

Highlights from the rest of the day included Graham Roberts on the main stage explaining how and why The New York Times in using AR; Charlie Fink predicting that convergence of AR and VR is 3-5 years away; Sam Schoonover talking about applying AR to the Coachella festival experience for fans and brands; and the OGs of VR – Linda Jacobson (Virtual World Society), Tony Parisi (Unity), David Frerichs (Amazon), and others – taking the main stage and leaving many longtime VR enthusiasts a little star struck.

Metrics from Shelley Peterson (Lockheed Martin) were encouraging for enterprises, who also heard tips from the trenches from Rodrick Lekey and Hans Wernke (Inhance Digital), Qualcomm’s 5G lineup from Brian Vogelsand, and from Jinha Lee and Jacob Loewenstein (Spatial) on defeating the 2D screen and delivering near-in-person collaboration. Hannah Nye (Design Interactive) urged creators to design like they’re no longer confined to 2D user interfaces and the Rokid team discussed designing a seamless solution for their AR glasses; while developers settled in for two back-to-back sessions about the AR Cloud featuring Jason Fox (Microsoft), Galia Schwarz (Resonai), and others.

Finally, the crowd walked over to the Hyatt Pool to unwind with a drink and some VR snorkeling in the pool thanks to Ballast Technologies!

Thank you for an incredible start to #AWE2019!