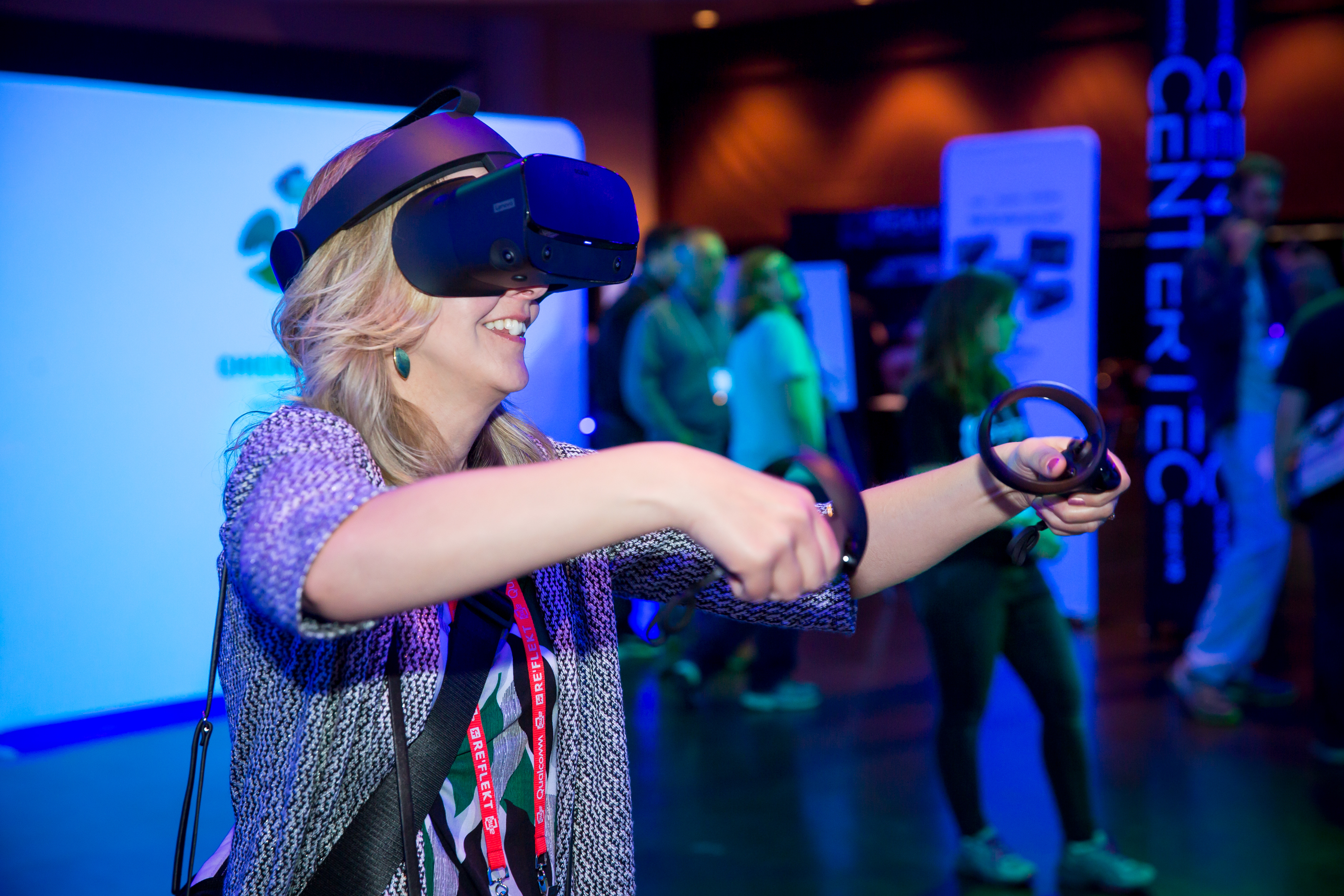 "AWE is a snapshot of a developing industry...It's going to be an incredibly important and exciting year for AR/XR, and AWE is at the epicenter of all this." -- Charlie Fink, Forbes

2019 marked a big milestone for AWE--10 years! We know that spatial computing is more than just hardware and software and AWE is more than an event; it's a passionate community of people who gather each year to get the pulse of the industry, share their inventions and ideas, have some important but difficult conversations, and push XR forward.

This year's conference agenda introduced five new dedicated tracks: Gaming & Entertainment, Marketing & Sales, XR Enablement (AI, 5G, the AR Cloud, etc.), Humanities, and Training & Education. If nothing else, these additions (or refinements) alone are a sign of the industry's progress. Read on for some of the themes that emerged across all tracks and in the Expo Hall at the 10th annual AWE:

In his morning keynote on Day 1, Tim Merel (Digi-Capital) predicted that enterprise will be the biggest driver of smart glasses revenue for the next five years. It's pretty clear that enterprise is the money-maker for XR companies right now, as the business and industrial use cases are maturing and the ROI is real. But every year, more and more mainstream brands come to AWE to talk about their explorations into (consumer-facing) AR/VR, and this year was no different: From the NBA and the Boston Red Sox to the Coachella Music Festival, The Ellen DeGeneres Show, and blockbuster movie franchises like Star Wars and DreamWorks' How to Train Your Dragon; XR is well on its way into the mainstream consciousness.

Aside from enterprise, there were a number of talks and even a dedicated panel about making money with XR. We learned that LBE VR businesses can be successful and that museums and science centers can be more profitable by providing AR/VR experiences; and we found out that AR shopping apps like Houzz's make consumers far more likely to buy.

Immersive tech is a powerful medium for storytelling. At AWE, speakers from the worlds of entertainment, journalism, marketing and more discussed new techniques for storytelling made possible by AR/VR and explored the implications, including what happens when the viewer, reader or consumer can "step inside" the story. As you can imagine, the old rules don't always apply.

There was, of course, a panel all about Immersive vs. Narrative Storytelling. Elsewhere on the agenda, Vicki Dobbs Beck of ILMxLAB (the XR arm of Lucasfilm) stated that storytelling has become "storyliving." Chris Bobotis (Adobe) explained that the story happens in the mind, not the device. Allan Cook (Deloitte) told marketers to turn consumers into the heroes of the story. Goro Fujita (Facebook) described the moment he realized he could meet his own characters in VR. Graham Roberts shared how The New York Times uses AR to bring the news to you (as opposed to VR which takes you somewhere). The effect? Longer engagement time, according to Ray Soto (USA Today). The power of immersive storytelling was also evident in the candid customer reactions to Dreamscape Immersive's location-based VR experiences shown by Jennifer Cook. Even data alone can be used to tell a story--XR allows us to do that.

Talks and demos on the expo floor had attendees contemplating and using all their senses, including sound: On the Main Stage, Michael Ludden introduced Bose AR and Bose's sound-first approach to AR. The reveal of the Bose Noise Cancelling Headphones 700 highlighted the importance of the absence of sound, as well, in AR. On the Creator Track, Amy LaMeyer (WXR Fund) delved into how sound augments reality, heightening immersive experiences, reducing cognitive load and enhancing emotion.

In the expo, there was some seriously amazing tracking technology - foot, body, hand, facial - for advanced interaction in XR (more on that below), and lots of haptic engagement at the Ultrahaptics booth in the AWE Playground. Take it from Twitter user @SomediaCSO: "I could feel the lightning bolts from the display and I could feel water pouring over my hand without the use of a glove." On full-body haptics, Emily Pascual (Change.org) tweeted "I tried on the @teslasuit at #AWE2019. Feeling your VR environment is next level immersion."

This was my fourth AWE, and I have to say I was extra impressed walking around the expo hall this year. The Varjo XR-1 Developer Edition earned a lot of praise, such as "the human-eye resolution is truly impressive" and "oh my god, it was sooo fantastic and amazing!" @webjournalist tweeted "Holy smokes! I tried @varjodotcom's XR headset and I am blown away. The game has changed." If, like myself, you didn't get the chance to try out the XR-1, Varjo shared a clip of unmodified footage shot through the device here.

I did, however, wait in line to put on the nreal light and all I can say is that I want those glasses! Nreal light is the first pair of smart glasses I might actually buy and wear regularly, and I'm not alone. Take it from Twitter user @JasonGFox: "Got to check out @nreal_MR yesterday at #AWE2019. Great stuff! Closest I've seen to mass consumer-grade AR glasses." Citing Varjo and VRgineer's XTAL headset, Brad Templeton wrote in Forbes, "If you are hard-core, however, then a new generation of high-resolution glasses have arrived." LetinAR's PinMR lens were also noteworthy, as was RealMax's AR/VR device with hand tracking by Leap Motion used for an untethered, multiplayer AR game in the Playground. Besides the VR arcade-scale experiences in the Playground, this year's expo showcased more natural tools for interaction, such as the Logitech VR Ink, which @AndrewMitrak said "feels wonderful," Tap's wearable keyboard and mouse, BeBop Sensors' VR glove, and more. Even the industrial XR applications were fun, as evidenced by the steady lines at Qualcomm's XR training station and Raymond Corp's forklift simulator for the greater part of the event.

This year, AWE incorporated more mobile AR into the traditional event experience with the help of partners like LOOks and 8th Wall. Attendees were able to exchange contact information via what Next Reality's Adario Strange called "the coolest augmented reality-powered swag I've ever seen" (the LOOks bags) and got really into the Web AR scavenger hunt powered by 8th Wall. Bizcommunity also brought readers the first AR-enabled article series directly from the show, allowing readers to follow event coverage using the Zappar app on their phones. There were many products on the show floor, like a bottle of Jack Daniels at Tactic's booth, that came alive via attendees' AR-enabled phones; and mobile AR even showed up on stage during a panel on identity moderated by Tom Emrich, with each panelist using a Snapchat or other app filter to alter his/her appearance.

On the AWE agenda, a number of presenters spoke to shared XR experiences, from bringing fans together in VR to watch a live event to making friends and building communities (Iva Leon, ARVR Women and Allies) and drawing together in virtual environments (Paige Dansinger, Better World Museum). Facebook's Meaghan Fitzgerald said that the future of VR is social and Terry Schussler (Deutsche Telekom) said that "One of the big payoffs of 5G and edge computing is to be able to create communal shared experiences, not just a solitary siloed one." Even more, Andy Fidel and Alina Kadlubsky organized AWECORE, like a conference within a conference held in VR, including virtual panels and presentations, even 3D charades and global laser tag. The agenda was an incredible feat and successful experiment in putting on a virtual event and the potential role of VR at AWE for enabling attendees to tune in from all over the world.

Morals and ethics of AR/VR.

In his Opening Keynote, Ori Inbar referred to 2019 as the Year of the Creator. It's time for creators to show what AR/VR can be used for, but with new opportunities (new tech, new markets) come new responsibilities to put humanity at the center of UX design (Timoni West, Unity), to experiment responsibly and not "mess with people's brains" (Matt Daly, Wargaming Group), and to keep ethics and privacy at the forefront of XR thinking.

The moral and ethical implications of AR/VR are wide and were at the center of a number of important conversations that need to be had as we shape the future of spatial computing at AWE. There were panels on the Ethical Landscape of XR Entertainment and how to operate an Ethical Enterprise in XR, both presented by Virtual World Society; as well as a session on the sticky legal question of who owns augmented space and a great talk by Martha Mendizabal (TechnoLatinx XR Lab) on bridging the poverty gap in XR (especially when it comes to access to XR technology). Kent Bye (Voices of VR Podcast) capped off the entire event by presenting an "XR ethical framework" for understanding the privacy risks and moral dilemmas of mixed reality, reminding us that virtual experience is human experience.

In addition to considering the tough realities of the industry, speakers presented inspiring examples of using AR/VR for good. Sarah Hill (Healium by StoryUP Studios) spoke to XR's therapeutic impact on anxiety and trauma victims; Robert Hernandez and his USC JVRNALISM team shared how his team used Snapchat Lenses to tell an AR story about homelessness in L.A.; and Kristie Overstreet talked about the potential of AR/VR to help people explore gender identity, explore the coming out process, and alleviate gender dysphoria in a safe space. Finally, team SIA presented their winning Garage Stories hackathon project, which aims to make the world more accessible to people with cognitive disabilities like Autism through AR characters and stories.

Continue these conversations and start new ones at AWE EU 2019 October 17-19 in Munich, Germany! Submit a talk, become an exhibitor, and get notified when tickets go on sale now!