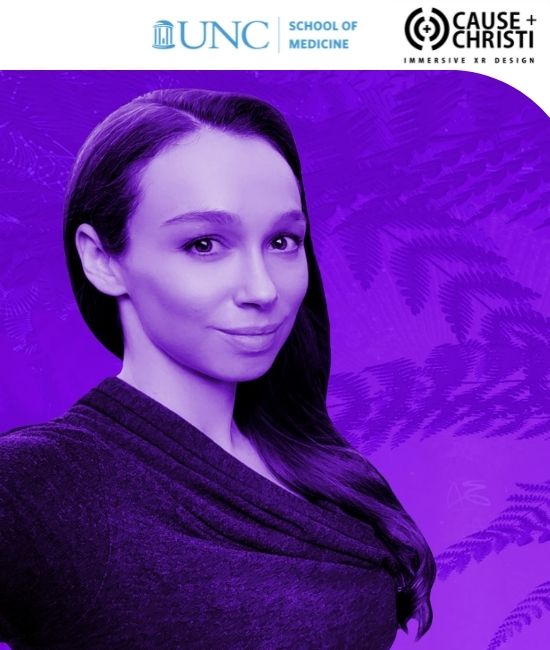 Christi is a professional virtual world designer, 3D + 360 artist, and immersive interaction developer. She is one half of the XR design house Cause + Christi who together have been instrumental in the creation of quite a number of memorable large-scale events in virtual reality lately, ranging from the UN ActNowVR series to BRCvr.

In addition to designing social VR spaces, Christi is an XR Instructional Media Producer at the University of North Carolina at Chapel Hill, School of Medicine IT, where she leads the research and development of XR in curriculum. Working with knowledge experts in the School of Medicine and UNC Hospital, she creates custom experiences to meet training needs. Her “Trauma Services VR: A Patient’s Point of View” experience is an interactive, branching narrative training simulation that allows medical students & healthcare professionals to step into the perspective of a patient, make decisions on behalf of the care team, and immediately experience those choices firsthand, to build the empathy and understanding that improves patient-centered care.

In early 2020, Christi defended her Master's Thesis VR project and graduated from UNC Chapel Hill's Environment and Science Communication Dual Degree program. As a student, she focused on XR design for immersive storytelling and learning, worked in multiple VR labs simultaneously to create experiences while teaching others, and sharpened her skills in 360 Videography, 3D Modeling, Unity Development, Adult Learning Theory, Strategic Communication, Sustainable Design, Blockchain, and Geospatial Information Systems. Christi’s passion is to reach people where they’re at: weaving together small details - the touchpoints - that bring big picture stories to life. Drawing on principles of narrative transport, spatial presence, memory and cognitive elaboration, her goal is to create virtual experiences that have real-world transfer.

Just before the spring of 2020 - when the world would soon enter the age of isolation and remote work - Christi joined the Educators in VR conferences and discovered a whole new facet to immersive content design: Social VR. She quickly invited Cause to explore & create shared VR experiences, and the design duo was born. Cause + Christi teamed up with the BRCvr crew and played a key role in helping the first official virtual Burning Man event come to fruition, then stuck around to help the 2021 event happen, even bigger and better! BRCvr won the Producers Guild of America Award for Most Innovative Experience of 2021.

In 2021, Cause + Christi was on its way up as its own force with heavyweight jobs already in the pipeline. They worked with Baobab Studios to bring the forest of Baba Yaga to life in AltspaceVR for their virtual red carpet premiere -- with stars & press attending in headset. They worked with the UN's YOUNGA + BridgingTheGap Ventures to create a one-of-a-kind spaceship nightclub and mixed reality music video featuring a "holographic" performance by Grammy award winner Pitbull. They built a solar-powered steampunk-inspired city in the sky for Solar Fight Night, an annual networking event for the solar industry’s largest social club, with sponsors like the Solar Foundation. They also worked with the Golden Apple Comics shop in LA to create a digital twin of their brick & mortar store, while adding a gorgeous promenade in the back to host live virtual Wondercon events. On top of these kinds of jobs, Cause + Christi helped bring the first Polys WebXR Awards to the world and have continued to support that team with their ongoing endeavors to unite the XR world through interoperability.

2022 has continued to gain steam with the design duo working alongside the United Nations once more to build digital twin VR worlds in AltspaceVR that represent UNESCO cultural heritage sites around the globe. So far the Al Wasl Dome in Dubai and the Uluru National Park in Australia have been completed and released, with more certainly on the way.

"MetaTr@versal: A Day in the Life" | A Play About Humanity in the Metaverse!

Jacki Morie | All These Worlds, LLC