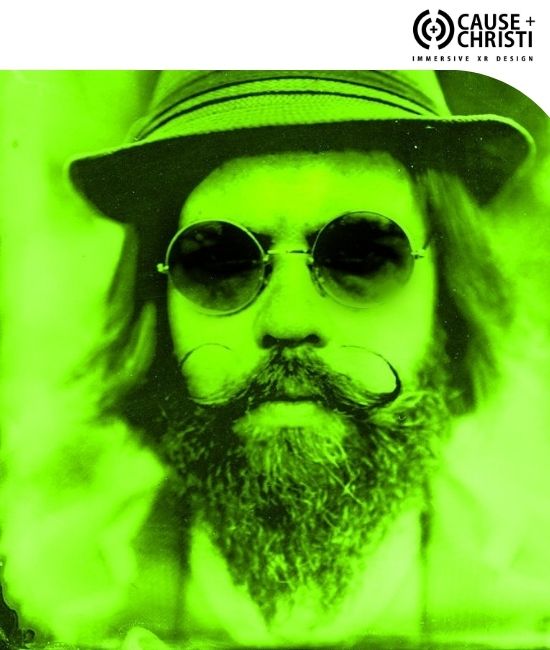 Austin, better known in the VR scene as "Cause," is a professional virtual world designer and immersive interaction developer. He is one half of the XR design house Cause + Christi who, together, have been instrumental in the creation of quite a number of memorable large scale events in the virtual reality space lately. Cause comes from a background of production in film, photography, graphic design, and audio engineering, with a fondness for video games and low poly design aesthetics so a move into the virtual space was simply inevitable.

In 2020, being a longtime burner himself and already an enthusiast VR world builder, Cause teamed up with the BRCvr crew and played a key role in helping the first official virtual Burning Man event come to fruition. He created the very popular "Burning Saucer" flying playa nightclub world, worked to design a number of key technologies and effects used throughout the overall project, helped with on-site technical support to get events running, and created the Discord communities to help disseminate information across the masses. He stuck around to help the 2021 event happen, even bigger and better! In fact BRCvr won the Producers Guild of America Award for Most Innovative Experience of 2021.

In 2021, Cause + Christi was already on its way up as its own force with some heavyweight jobs already in the pipeline. They worked with Baobab Studios to bring the world of Baba Yaga to life in AltspaceVR for their virtual red carpet premiere -- with the stars even attending in headset. They worked with the UN's YOUNGA and BridgingTheGap Ventures to create a one of a kind spaceship nightclub and mixed reality music video featuring a "holographic" performance by Grammy award winner Pitbull. They also worked with the Golden Apple Comics shop in LA to create a near perfect digital twin of their brick and morter store, while adding a gorgeous promenade in the back for hosting live virtual Wondercon events. On top of these kinds of jobs, Cause + Christi also helped play a role in bringing the first Polys WebXR Awards to the world and have continued to support that team through their ongoing endeavors to unite the XR world through interoperability.

In 2022 things have continued to gain steam with the design duo working alongside the United Nations once more to build digital twin VR worlds in AltspaceVR that represent UNESCO cultural heritage sites around the world. So far the Al Wasl Dome in Dubai and the Uluru National Park in Australia have been completed and released with more certainly on the way. Cause himself also designed and built the latest Failed to Render virtual comedy club in AltspaceVR which is gaining a lot of popularity day by day and beginning to bring in some serious comedy talent.

"MetaTr@versal: A Day in the Life" | A Play About Humanity in the Metaverse!

Jacki Morie | All These Worlds, LLC