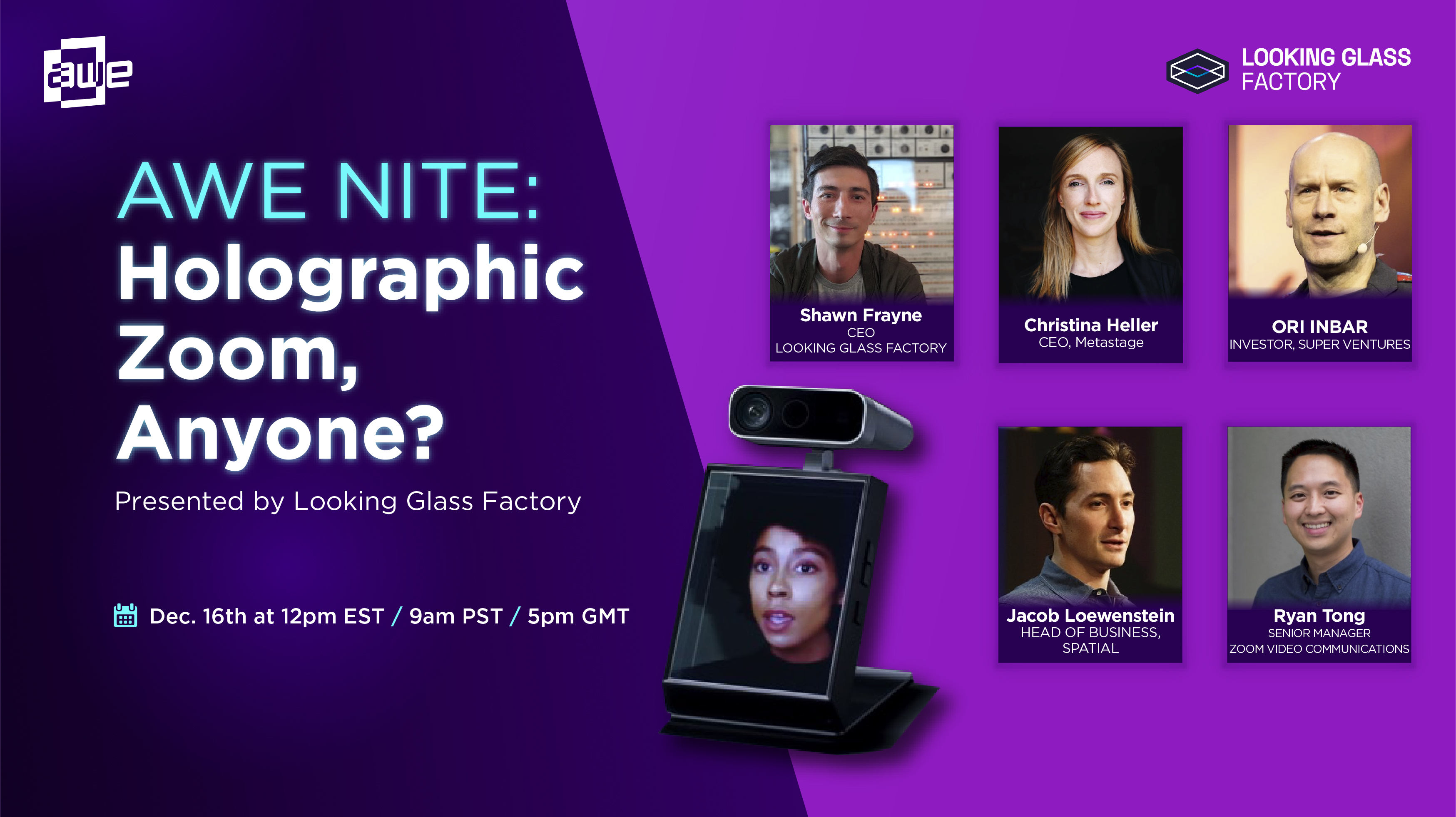 Inbar began by dedicating the event to the future, and asking the question of the night: are we ready for holorgaphic communications? Inbar introduced the panel, and then jumped right in on asking questions of the panel of experts. The Q&A can be seen below (please be aware, the Q&A written out below is a summation of what was said by all panel members, and is not an exact transcript. Please see below for the full video of the event)

Q: What does holographic zoom mean to you, and what’s so good about it?

Q: What are the challenges? Why aren’t we there yet?

Time-to. Again it’s the convenience barrier. It needs to be something that people can just jump into in seconds. On top of that, the quality needs to be up to par. If the quality is low, then the presence is affected, and it doesn’t do what it’s designed to. People need to be able to have high-quality, instantaneous communication, and it needs to be easy for them to access. Headset-free is another consideration. Is this something that you can have ambiently on in the background, either paying attention to it or not? Is it something that multiple people can gather around? The process to get there will come in two phases:

1-      Starting next year, users will need to have one or two depth cameras for recording, and this can be translated into mocap (motion capture) controlled avatars

2-      In the next few years, this will then transition to image-based capture and display, and this is really what we’re working towards.

At this point, Inbar passed the floor to Frayne, who showed a demo-video and talked about his company’s newest product, the Looking Glass Portrait.

He spoke on the excitement from the community on the product, and the incredbile reaction to the Kickstarter campaign, which reached its goal of $50,000 in under 45 minutes, and which at the time of the event had broken $1M, and since reached nearly $2.2M, 44X the original goal (at time of writing). The improvements that the Portrait make on the company's old system include that holograms can now extend beyond the frame of the display, and has a fully stand-alone mode. 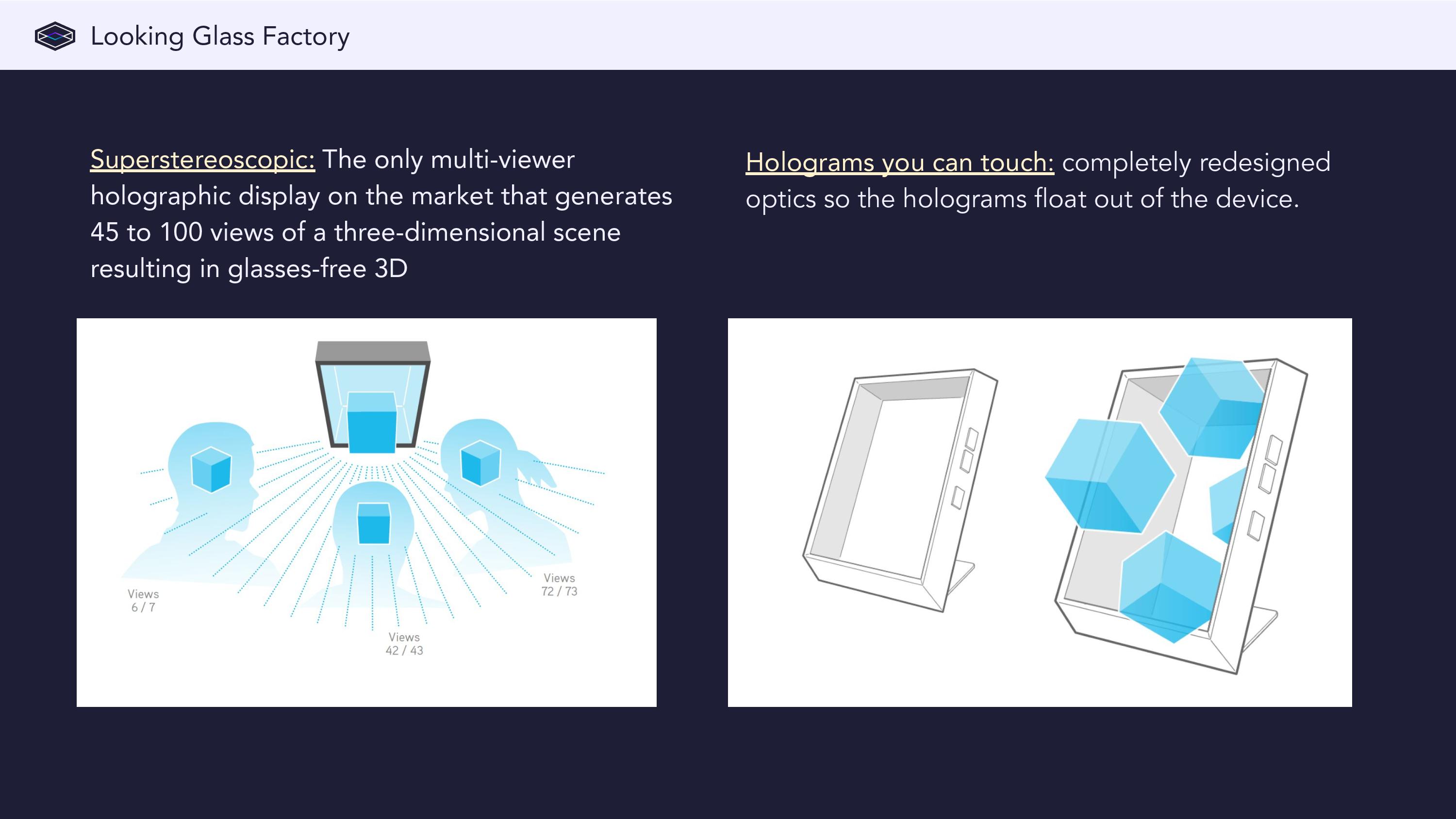 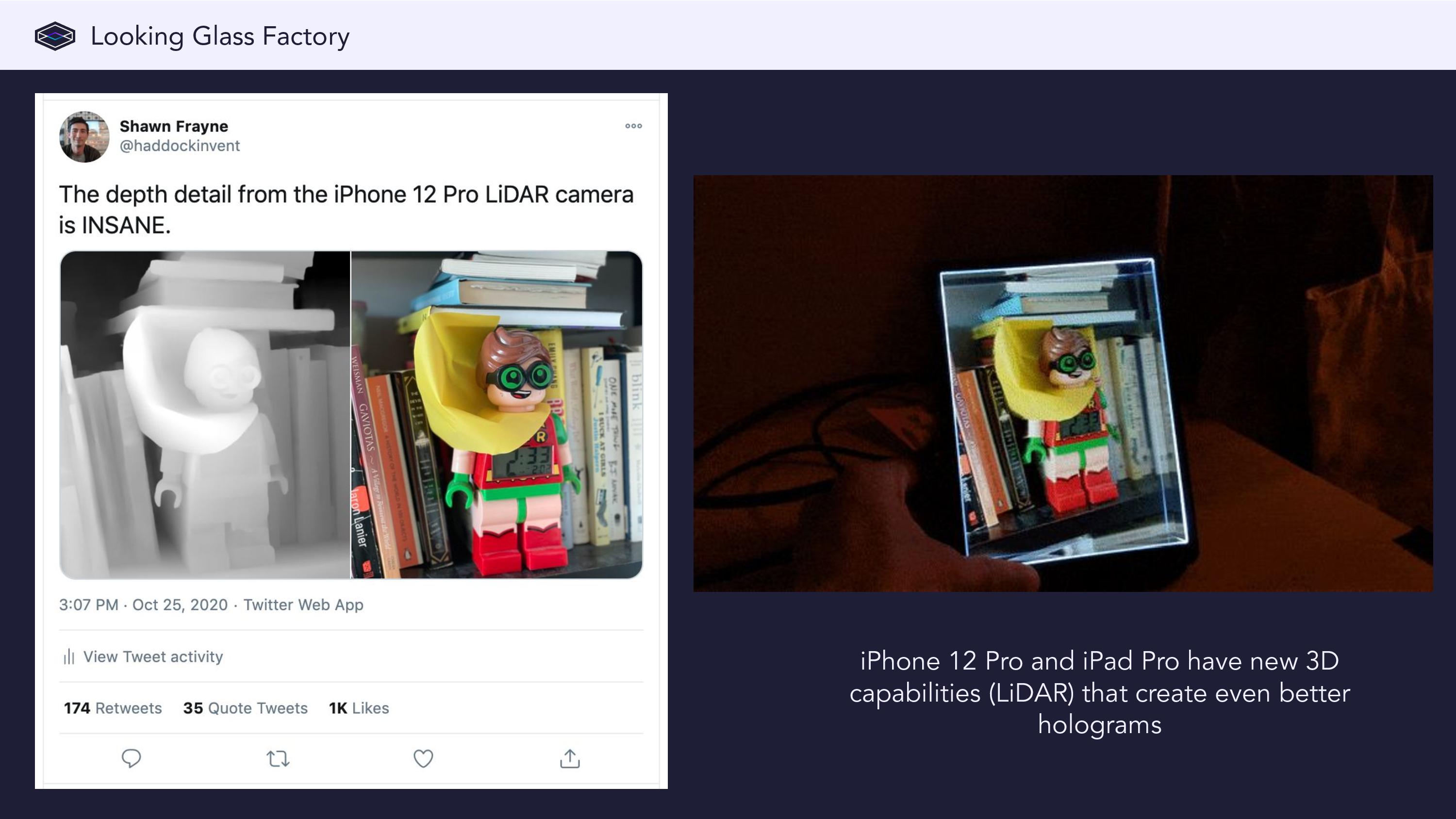 Taking back the floor, Inbar then took advantage of having a panel full of potential competitors by asking each a "spicy question" on how their company plans to remain relevant and make a place for themselves.

Q for Jacob Loewenstein: So Zoom isn’t quite where you are at yet with Spatial, although they’re thinking about it, so you have a head start. How do you make use of it, and what do you do when they apply their market penetration to catch up?

A: It’s the same as what Ryan said in that they welcome competition. No one is entitled to win the space, it goes to who can produce the best product. Often, the incumbent can’t come to the next phase as strong because they have to maintain their existing platform and keep that steady, whereas startups don’t have the same massive overhead and demands. On top of that Spatial “is Switzerland” with a lot of partnerships throughout the industry. They’re not looking to replace anyone or make enemies, just fill in a gap and do it the best.

Q for Christina Heler: Metastage is focusing on high-end avatar creation. Is that really what we’re going to need in the future, or are we going to want what we can just turn on and have as realistic as possible in the moment?

A: Everyone wants instant awesomeness, and as soon as that’s available it will undoubtedly be exceedingly popular. What Metastage is trying to do is be volumetric experts, and be the best at that, while keeping an eye on new tech that could eventually supersede their huge capture system. But their kind of capture, which includes scripted content and requires a large capture system, there will always be a place for that high-quality production. She thinks it will split, with consumer easy to use products as well as high-tech professional studios like Metastage.

Q for Shawn Frayne: In the near future when everyone has smart glasses and headsets, what’s the need for something on our desks?

A: He actually doesn’t think that the future will consist of everyone wearing headsets at all times, and that wouldn’t be a good thing to be strapped in all day. XR headsets will have a niche, and it will be a different niche from that of a desktop device like the Portrait

The floor then opened to questions from attendees, who asked both by turning on their audio and video and through the chat.

Q:In watching looking glass develop, I have always thought that it would be a constant ambient presence in the room
A: Yes, that's also one of the ways that the company has been thinking of this product. It's something you can look at when you want to and turn away from when you want to. They see that as the true advantage of this tech.

Q: Can the Portrait be used to stream videos off of a desktop?
A: It can as long as those videos contain the 3D data. There's nothing like that for desktops at the moment, so you'd need an external device.

Q: What is the best depth sensor?
A: Spatial has tested them all out at some point, and have used the Azure Kinect a lot, but in terms of accessability and easy the iPhone 12 Pro is doing well. Phone capture has enabled a lot and we will likely see more soon.

Q: What would it take to have a Total Recall- like holographic window?
A: There is no limit on the size that the physics behind the Portrait can reach. They've currently gone as large as 32". However, the larger it gets the more pixels you need. That's the only real limitation. One the size of a window is certainly possible


With this the panel concluded. Inbar wrapped up, thanking each of the speakers and giving them a chance to say any final thoughts.

Throughout the panel the chat was highly active, with attendees asking and answering questions of one another and making connections. At one point, the chat was flooded with people saying where they were watching from, and answers included across the US, as well as Germany, Scotland, Slovakia, Israel, Finald, Zimbabwe, Turkey, and more. In all, the event was attended by more than 150 members of the AWE community, and the video has racked up more than 400 views on YouTube in the 3 weeks since it was posted (at time of writing).

Watch the video of the event here